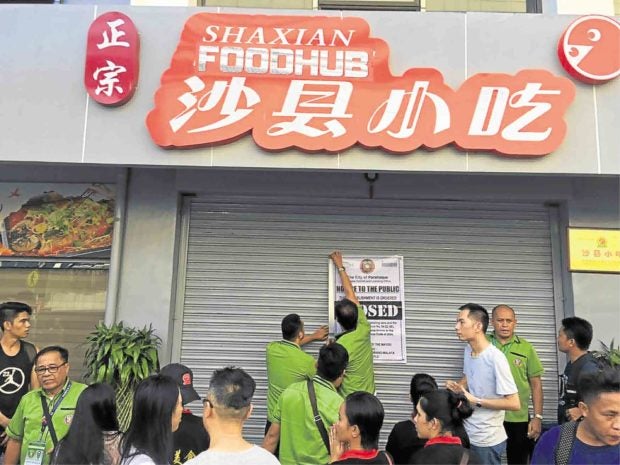 CLOSED FOR BUSINESS As workers and clients of one of the erring Chinese restaurants look on, officials of the Parañaque business permits and licensing office implement a closure order. —PHOTO COURTESY OF PARAÑAQUE PIO

The Parañaque City government has ordered the closure of 18 Chinese-owned or managed restaurants and business establishments found to be either violating local ordinances or operating without the necessary permits.

The closure orders took effect on June 20, 21 and 24. Most of the affected establishments were in Barangays Tambo and Baclaran, around 100 meters away from the Pagcor Entertainment City, Melanie Soriano-Malaya, chief of Parañaque’s business permits and licensing office, said on Tuesday.

Some of these were on Quirino Avenue which became host to many Chinese restaurants catering to Chinese employees of Philippine Offshore Gaming Operators (Pogo) holding office at the former Uniwide Pearl Plaza mall.

Malaya said the establishments were found to be operating without business permits and in disregard of the city’s sanitation and environment codes.

In addition, they also violated a local ordinance requiring business establishments with foreign signs to provide an English translation.

The crackdown on erring establishments was ordered by Parañaque Mayor Edwin Olivarez amid reports that Chinese businesses catering only to Chinese citizens had been proliferating in the city, with their signages and menus written in Chinese characters.

City officials learned that the majority of the Chinese-owned restaurants were using Filipino dummies. Some of these were also being protected by people in the barangays where they were operating.

Last month, the Department of Trade and Industry suspended the operations of a food park in Las Piñas City which allegedly catered only to Chinese nationals.

Of the 30 food stalls in China Food City on Alabang-Zapote Road, only one was found to have a business license and a permit to operate.