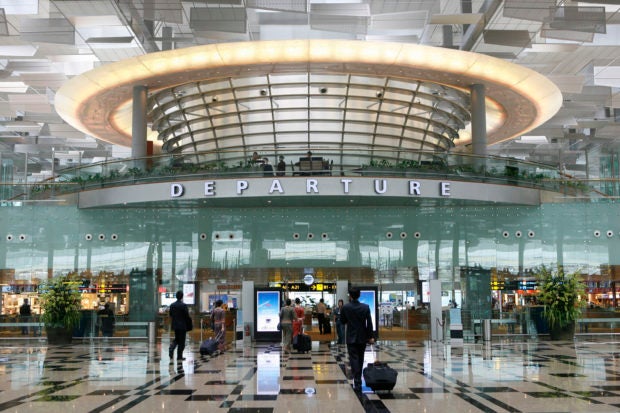 In this October 8, 2008, file photo, passengers walk through the departure hall at the Changi International Airport in Singapore. Drones buzzing around Singapore’s Changi Airport have caused the delay or diversion of 63 flights in the past week, triggering an official investigation and raising questions about the motives of the offenders. Regulators said Tuesday, June 25, 2019, that 18 flights at the airport were delayed and seven were diverted the night before “due to bad weather and unauthorized drone activities.”(AP Photo/Wong Maye-E, File)

SINGAPORE — Drones buzzing around Singapore’s Changi Airport have caused 63 flights to be delayed or diverted in the past week, triggering an investigation and raising questions about the motives of the offenders.

The Civil Aviation Authority of Singapore said Tuesday that 18 flights at the airport were delayed and seven were diverted the night before “due to bad weather and unauthorized drone activities.”

It had earlier confirmed drones were seen flying near the airport last Tuesday and Wednesday. That caused the intermittent closure of a runway, delaying 37 flights and diverting one arriving plane to Kuala Lumpur, Malaysia.

“A multiagency team including the Civil Aviation Authority of Singapore, Changi Airport Group, Singapore Armed Forces and the Singapore Police Force was activated for the search and locate operations,” the regulator added.

It declined to comment Tuesday on the number of drones involved or their likely operators, citing the ongoing investigation.

Shortly after news broke of the drone activity at the airport, Singapore’s defense ministry posted a photograph of a soldier pointing a jammer gun at a “rouge drone” on Facebook.

While the photo wasn’t taken at Changi, it hinted at the anti-drone technologies that may be used to track down offenders.

Drones are largely controlled by operators via a radio control link, on a frequency that’s similar to Wi-Fi.  A jammer gun temporarily disables this connection.

“In absence of a control link, most drones are designed to switch into ‘fail-safe’ mode, and may either attempt to return to its original location or immediately land,” said Foong Shaohui, an associate professor who researches unmanned systems at the Singapore University of Technology and Design.

“It would be possible to identify the operators by analyzing the information stored in the drone” such as pictures and flight data, he added.

Some observers said the incursions, which happened on two occasions and less than a week from each other, could signal the involvement of more sophisticated groups.

Mark Yong, chief executive of Garuda Robotics, took vast media coverage on the dangers of flying drones around the airport into account.

“Since this is a repeat event … there is a good chance that this is not an accidental airspace intrusion or an ignorant drone operator,” he said.

Unauthorized drone activity is dangerous around airports because of the risk of collision with planes that are taking off and landing.

Drones cannot be flown within 5 kilometers (3.1 miles) of airports or military bases in Singapore without a permit. The offense carries a penalty of up to a year in jail and a fine of 20,000 Singapore dollars.

Changi Airport is among the world’s busiest terminals. It handled a record 65.6 million passengers last year, but its executives have named rising fuel prices and trade tensions as challenges going forward. /kga