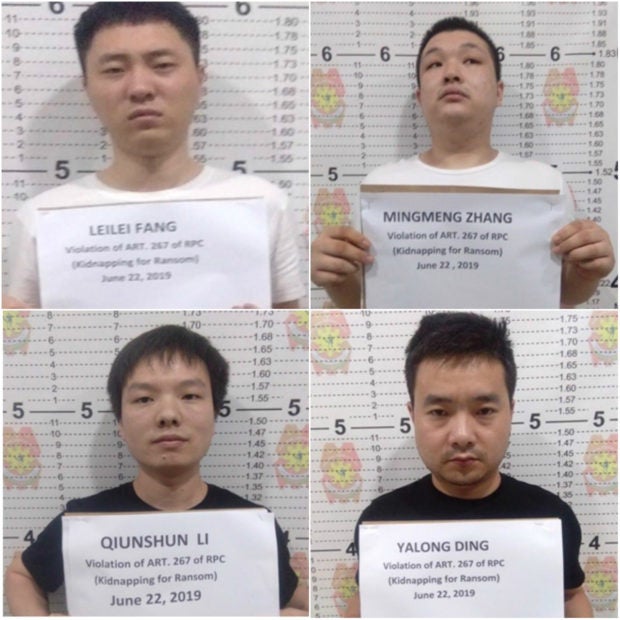 Four Chinese nationals pose for mugshots after their in arrest in relation to the alleged kidnapping of a fellow Chinese in Parañaque City. PHOTO from PNP-AKG

MANILA, Philippines — The Philippine National Police-Anti-Kidnapping Group (PNP-AKG) has rescued a Chinese national allegedly kidnapped by four other compatriots after failing to pay his debt.

The PNP-AKG on Tuesday identified the victim as Li Bo, 29, who is staying in the country as a tourist.

According to a report from the PNP-AKG, the victim was forcibly taken to a cab by his abductors at around 2 a.m. on June 20 while he was waiting for a ride at the lobby of a resort and casino complex in Parañaque City.

He was later brought to a condominium also in Parañaque, where he was allegedly beaten by his captors several times.

Police said the victim owes the suspect some P200,000 with a five-percent interest per day. During his ordeal, he managed to send, through a messaging app, his exact location to one of his friends, who then reported the incident to the PNP-AKG.

Operatives of the PNP-AKG then launched an operation at the condominium and successfully rescued the victim at around 7 p.m. on June 22.

The suspects were brought to the office of the PNP-AKG at Camp Crame. They later went through inquest proceedings led by a senior assistant prosecutor of the Department of Justice for the crime of kidnapping for ransom with serious illegal detention. (Editor: Eden Estopace)