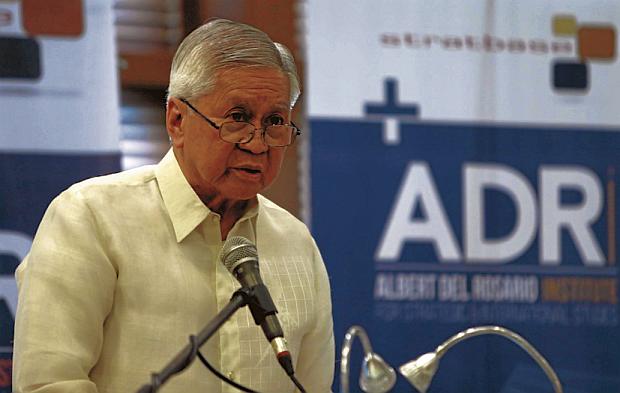 MANILA, Philippines — Former Foreign Affairs Secretary Albert del Rosario on Monday said he would be tapping the office of Vice President Leni Robredo for help in delivering his P500,000 donation to the 22 fishermen whose boat was hit by a Chinese trawler in the West Philippine Sea.

“I plan to ask VP’s office if they can help in fairly delivering the donation to the affected fishermen,” Del Rosario said in a text message to INQUIRER.net.

Del Rosario added that they would still “need to assess our options” as to how the donation would be used.

Earlier, he said he gave the donation to the Department of Foreign Affairs last June 19 “to manifest from my heart that we truly care for them and sympathize with what has happened.”

However, Foreign Affairs Secretary Teodoro Locsin Jr. announced on Monday afternoon that he had returned the donation to Del Rosario as the DFA “cannot dispense donations.”

“I have to return the P500,00 check donation or I shall be compelled to turn it over to the Treasury,” Locsin said in a tweet.

“So with florid expressions of gratitude I had it returned to Del Rosario,” Locsin added.

The 22 fishermen were in their fishing boat, the Gem-Ver 1, when it was hit by a Chinese trawler in the West Philippine Sea.

The fishermen said they were left by the Chinese crew as their vessel started sinking, leaving them floating on water for hours before being rescued by a Vietnamese fishing vessel.

Since the incident, the fishermen have received financial assistance from the government, as well as 12 fiberglass fishing boats complete with engines and fishing gear.