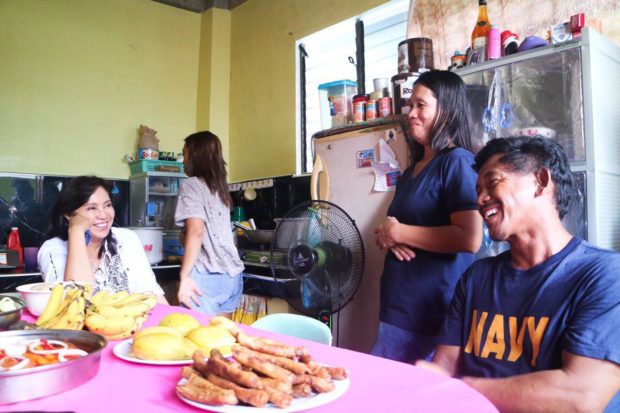 Vice President Leni Robredo shares a light moment with FB Gem-Vir 1 Captain Junel Insigne and his wife at their house in San Jose in Occidental Mindoro on Friday, June 21, 2019. (Photo from the Office of the Vice President)

MANILA, Philippines — Vice President Leni Robredo recalled on Sunday her visit to the 22 Filipino fishermen whose boat was hit by a Chinese trawler at the Recto Bank in the West Philippine Sea, saying the fishermen were tense, nervous, and seemingly did not want to speak at first.

During the visit, the fishermen said Robredo talked and listened to them as they narrated their story of the ramming incident.

While the photos of the meeting looked light-hearted, Robredo admitted that the fishermen were tense and nervous at first and seemingly did not want to talk.

Robredo said, however, that the mood become lighter as they spoke.

[Actually, at the start, there I think only five of the 22 fishermen who were present. But as we went on chatting, maybe they felt that I was really there just to see how they were doing. Maybe the other fishermen were told about it, that’s why the others arrived.]

The Vice President also expressed concern over the livelihood of the affected fishermen, even calling the Filipino fishing vessel involved in the ramming incident “useless” because of the damage it sustained.

[Their estimate, granting that they could start repairing it right now — but then they have no money for that — the fastest it can be repaired is around 3 months.]

Robredo also clarified that the P50,000 cash given to each of the fishermen did not come from the Office of the Vice President. It came from her Angat Buhay program.

[I told them that the financial aid given did not come from my office. I was just the messenger. The Angat Buhay partners were the ones who raised the money that was given.]

The Filipino fishermen were reportedly left floating in the middle of the West Philippine Sea after their boat was ramming by a Chinese trawler at Recto Bank, internationally known as Reed Bank.

After hours of floating at sea, they were rescued by a Vietnamese fishing vessel.