2 Davao fishermen, lost at sea, end up in Indonesia 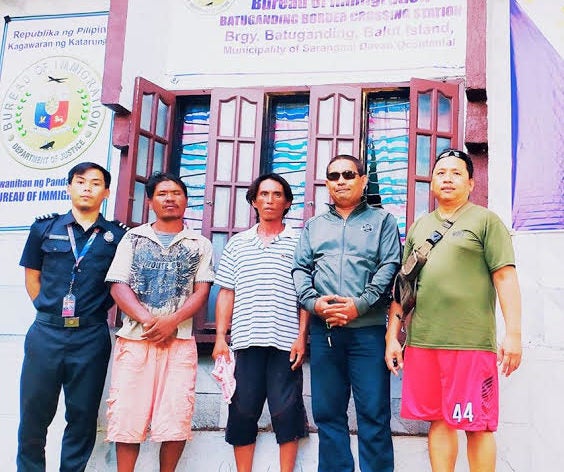 Rescued fishermen Milando Mamaba Yurdan, 41, and Brindo Panugol Dipareni, 43, (second and third from the left) of Malita, Davao Occidental are processed reentry into the Philippines through the Bureau of Immigration office in Sarangani town of Davao Occidental on June 21 following their repatriation from the Indonesian island of Marore in North Sulawesi, where they ended after getting lost at sea while fishing at the Davao Gulf on June 17. (Photo courtesy of BI Sarangani)

MALITA, Davao Occidental — Two fishermen from this coastal town got lost at sea while fishing amid foul weather at the Davao Gulf and ended up on Marore Island in North Sulawesi, Indonesia, travelling a distance of over 350 nautical miles.

The two fishermen, Milando Mamaba Yurdan, 41, and Brindo Panugol Dipareni, 43, were lost at sea for nearly 12 hours starting at midnight of June 17 before they ended up on Marore Island and later repatriated to Malita town on June 19 with the assistance of the navies of both countries, according to Harry Camoro, action officer of the Provincial Disaster Risk Reduction Management Council of Davao Occidental.

Yurdan and Dipareni told the Inquirer on Saturday that they were fishing at the Davao Gulf around midnight of June 17 when strong winds blowing from the western direction caused their motorized boat to move southward without them realizing that their small fishing vessel was already moving away from the Davao Gulf.

Yurdan said they were battered by waves so high and sea so rough that they lost all sense of direction.

Sometime around 2 a.m., Yurdan said he saw the lights of a vessel from the distance and followed it, thinking it was headed for the port of Davao City.

He said he maneuvered his motorboat towards a direction he thought was headed for Davao but later realized they were lost since they could no longer see any land mass.

Yurdan said it was then that he decided to stop the engine to conserve fuel and waited until sunrise for a clearer view of any land mass ahead.

He said the weather improved by the daylight of June 18 and he continued to sail towards the direction of the vessel he saw at dawn.

Instead of Davao City, however, they ended up in a strange island.

Dipareni, on the other hand, said he immediately realized that they were in a foreign land when after docking at the island, they were approached by a man who spoke in English and only asked if they were from “Pilipins.”

When he replied “Yes,” the man, without any words, walked away and returned with local authorities who provided them shelter and food.

Camoro said he learned about the missing fishermen on Wednesday June 19, from their families who sought his office’s help to locate them.

It was then that they learned that the two fishermen were in Marore Island, which is about 664 kilometers or 358.5 nautical miles from Sarangani.

It would take about five hours travel by sea between these two areas.

He said that with the assistance of Indonesian authorities, Philippine Navy personnel from the Balut station were able to fetch the two fishermen and provided with medical care and food before they were processed by the Bureau of Immigration in Sarangani town and turned over to the Philippine Coast Guard, which, in turn, brought them home to Malita on Friday, June 21. (Editor: Leti Z. Boniol)