Around the world, people likelier to return wallets with more cash 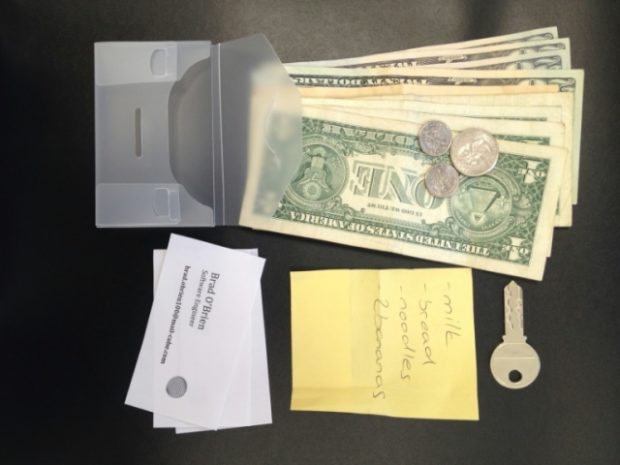 This undated image released by the publication Science, shows a clear wallet and its contents used in a study of how people in 40 countries decided to return, or not, “lost” wallets. Image: Christian Zünd – Science/AFP

Does the amount of cash in a lost wallet impact how likely a person is to return it?

Classical economic theories suggest that the greater the temptation, the less likely we are to be honest—but a new study turns the idea on its head, finding that altruism, and a powerful aversion to viewing oneself as a “thief,” outweigh the financial incentives.

A team of researchers studied these questions in a huge experiment spanning 355 cities in 40 countries—one of the most rigorous investigations so far into the intersection of economics and psychology.

The results, published Thursday in Science, also reveal extreme differences between countries, with Switzerland and Norway topping the honesty list, and Peru, Morocco and lastly China rounding out the bottom three.

But although rates of civic honesty varied greatly from country to country, one thing remained remarkably constant: wallets with money, as opposed to no money, boosted reporting rates.

The global average for reporting a lost wallet was 40 percent, which grew to 51 percent when it had money.

“The evidence suggests that people tend to care about the welfare of others and they have an aversion to seeing themselves as a thief,” co-author Alain Cohn from the University of Michigan said.

The researchers then polled a group of 279 top-performing professional economists to see if they would have accurately predicted the outcome, which only 29 percent did.

“Our results suggest that even experts tend to have cynical intuitions about other people’s motivations, often exaggerating the role of financial incentives and underestimating the role of psychological forces,” added Cohn.

The experiment, which cost $600,000, is unparalleled in its magnitude. More than 17,000 identical wallets were dropped off at banks, cultural establishments like theaters and museums, post offices, hotels, and police stations or courts of law.

The wallet would be placed on the counter by the research assistant, who would deliver it to an employee telling them they had found it on the street but were in a hurry and had to go.

Each contained a grocery list, a key, and three business cards in the local language using fictitious but commonplace male names and an email address, signaling the owner was a local resident.

Some had no money, while others contained the equivalent of $13.45, adjusted for purchasing power in the target country.

In three countries (the U.S., U.K. and Poland), they repeated the experiment with even more money: $94.15, which boosted reporting rates by an average of 11 percentage points compared to the smaller amount.

They also found that having a key boosted reporting rates by 9.2 percentage points in the three countries.

Since the key is valuable to the owner but not the finder, this pointed toward an altruism concern in addition to the cost of negatively updating one’s self-image.

The proportion of employees who got in touch with the owner surpassed 70 percent in Switzerland and Norway.

At the other end of the table was China, with fewer than 10 percent of employees returning the wallet when it was empty, though the figure more than doubled when it contained yuan.

Countries’ relative wealth or poverty was found to be insufficient in explaining the disparities, said Cohn, adding that education and political systems could play a role.

On the whole, countries which are more democratic and where citizens feel they are a part of the decision-making process tend to score higher on civic honesty.

That could explain why countries where family ties have traditionally been very strong, such as Italy, have a lower rate of return than more individualist nations in northern Europe, said co-author Christian Zund.

“Three of the authors have Swiss nationalities, so we were—of course, we were happy to see that Switzerland ranked among the top countries,” concluded Cohn. NVG

One work day a week enough for mental health boost—study