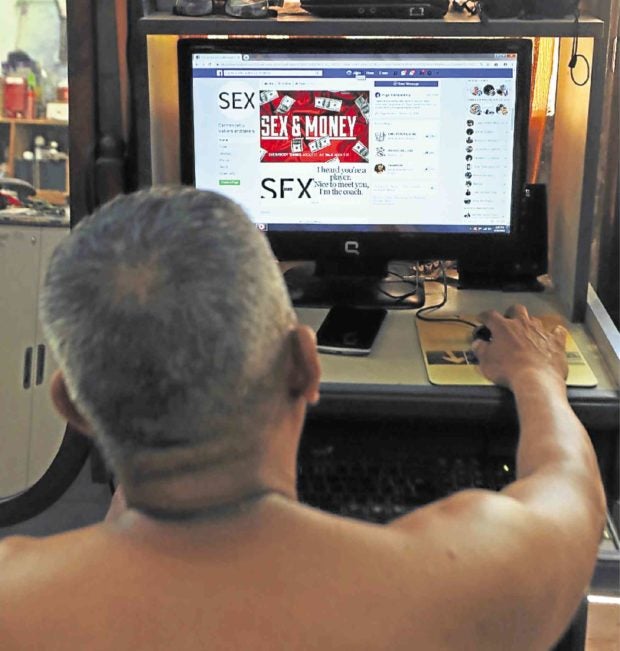 CEBU CITY — Rachel, 29, is not your usual Facebook user: She is using the popular social media site to sell herself.

A single mother of three, Rachel is what Facebook users call as “walker,” or an online sex worker. Using a dummy account, she posts her sexy photos and informs page visitors that she’s available for sex in exchange for money.

“I’m thankful for Facebook because I get more clients and my income is enough to support my three children,” she said in Cebuano.

According to Rachel, she usually gets seven customers a day since she started advertising herself on Facebook last year.

Dr. Fred Tampus, medical officer of the Vicente Sotto Memorial Medical Center’s department of psychiatry, said the primary reasons there are more social media sex workers are convenience and the loss of morals among young people.

“They could do it in the comfort of their home, in an internet shop or anywhere that has  Wi-Fi access. Social media could reach a very wide range of the market and internationally at that,” he said.

He continued: “But the real and more difficult issue to address is about the values and morals of these people. Parents, as should be, have a very important role. How the personality, including the values of these people, develops would depend on how they were raised. After which, education will then have an important supporting role.”

In the wake of the pervasiveness of social media sex workers, the reported number of sex workers in Cebu has dropped from 2,270 in 2010 to 1,578 in 2018, according to the city health office.

Rachel, a high school graduate, said it is more lucrative and more convenient to find customers on Facebook. “Most of my clients just post on the page to look for walkers. I comment on the posts and we just negotiate on Messenger where we agree on my terms as to how much it will cost, depending on the type of service they want,” she said.

“Because our transactions are usually done on Facebook, I don’t need a pimp, so I get all the money paid by my clients,” she said.

Rachel said she doesn’t only earn easy money but also enjoys sex. “I really like sex. I cannot live without it so I figured, if I can have sex with a lot of men and be paid in return, it will really be ideal for me,” she said.

Rafael, 31, a supervisor in a call center in Cebu, is a “taker,” or one who is willing to pay for sex through Facebook. He said he knew about walkers in 2012 through a friend, using the page Cebu Walkers, which cannot be searched or accessed by nonmembers.

He then started hiring walkers through the page in 2012. He paid a maximum of P8,000 to a walker for a whole night. “Most of the walkers I had sex with were mostly fresh college graduates and call center agents,” he said.

According to Rafael, hiring walkers is easier and more convenient as well as it provides him with a variety of choices. Another advantage, he said, is the negotiations are done privately.

“Before we had to go to Junquera [Street], where we could be chased by pimps and prostitutes alike. Now everything is smooth because you can just ask the girl to go directly to your motel room,” he said.

Another walker, Amelia, said she was picky in choosing her takers.

“I make sure they are not aggressive … by talking to them first. When I become certain that they are nice, we meet in a public place like a mall, then we go to a motel or hotel,” she said.

A third year college student in a Catholic school in Cebu, Amelia, 20, decided to be a walker in January when her father refused to pay her tuition after her parents separated.

“My mom didn’t have the means to send me to school, so I was left with no choice but to be a walker so I can finish my studies and become a psychologist,” she said.

Amelia learned about walkers from her classmates who also worked as online sex workers. “There are a lot of walkers in my school, which is why I told myself that if they could do it, I could, too,” she said.

Facebook, she added, makes it easy to be a walker. “Social media is the power of this generation. It serves as free marketing for everything, including sex,” she said.

But Amelia does not plan to become a walker for a long time. “When I graduate in college, I will stop being a walker because this is one nasty job,” she said.

Like Amelia, Rica, 23, wanted to be a walker to solve her financial woes.

She said she learned about walkers by browsing a Facebook page about walkers and takers. She then posted comments made by takers, hoping she would be hired by one of them.

“I’m short with money especially that I’m paying rent every month so I want to try to become a walker and make it as my sideline,” she said.

She said she was willing to be a walker so long as she could pay her monthly rent and daily sustenance.

But Rachel, Amelia and Rica may be held liable for cybersex under Section 4 (c) (1) of Republic Act No. 10175, or the Cybercrime Prevention Act of 2012, said lawyer Christine Ligtas-Salva.

Under the law, cybersex is defined as the “willful engagement, maintenance, control, or operation, directly or indirectly, of any lascivious exhibition of sexual organs or sexual activity, with the aid of a computer system, for favor or consideration.”

In the case of takers, Salva said they could be liable for aiding or abetting in the commission of cybercrime.

“It’s a form of misuse or abuse of technology, which the state recognizes as important and of which has been made by the state to protect its use. Though the actual sexual activity may happen elsewhere, the willful engagement for such activity has been done using cyber technology,” she said.

But it is difficult to file a case against both the walker and taker especially if they are both adults and there are no complainants.

A National Bureau of Investigation agent in Central Visayas, who declined to give his name, said the sworn statements of the possible victims are needed to determine the crime committed and more often than not, they refuse to give these.

In the case of two consenting adults, it is difficult to establish who is the victim especially if the supposed crime is confined in the privacy of a bedroom.