‘Shoes parade’ draws attention to plight of displaced in Marawi 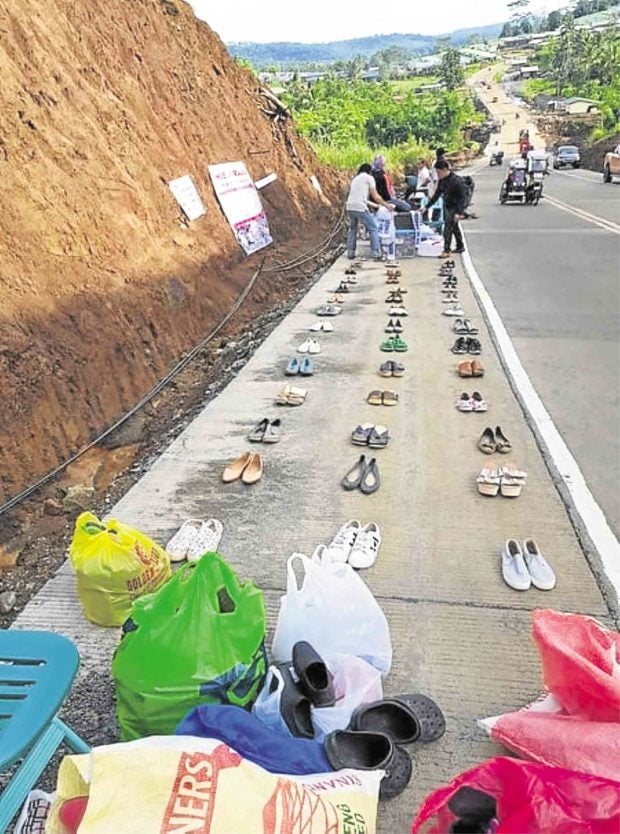 FOOTWEAR POWER. Around 1,000 pairs of used shoes and slippers are lined up along the Sarimanok-Sagonsongan Diversion Road in Marawi City to mark World Refugees Day. —Contributed

ILIGAN CITY—Around 1,000 pairs of used shoes and slippers were displayed for about a kilometer along the sidewalk of the Sarimanok-Sagonsongan Diversion Road at Barangay Sagonsongan in Marawi City on Thursday in the observance of World Refugees Day.

Several civil society groups based in Marawi organized the event, dubbed as “Shoes Parade: A Walk to Remember,” to renew their call for the immediate passage of the Marawi reparation and compensation bill pending in Congress.

The pairs of used shoes and slippers, donated by friends, relatives and supporters of the internally displaced persons, were lined up on the road leading to the site where around 2,000 families from the areas mostly affected by the war in Marawi were staying.

Barangay Sagonsongan is host to 2,000 transitory shelters, called “Sarimanok tents,” built by the government. These tents shelter more than 200 families who are still waiting to be transferred to temporary site at Barangay Boganga.

“In this location, we see the different colors and themes of temporary shelters that altered our usual two-story to four-story homes where our extended families converge. Here only immediate households can stay because of the limited floor area,” said Aslani Montila, executive director of Siyap ko Pagtaw, a civil society group based in Marawi City.

Montila said displaying the footwear was meant to draw attention to the plight of the survivors, young and old alike, who “experience grief over losing loved ones, hurt over the destruction of their homes and city, and the pain, trauma and desperation of the homeless.”

“These footwear [also] symbolize every civilian killed in the siege, for every child whose dreams were shattered, every family’s life disrupted … and every person who remained displaced until now,” he said.

Noraldin Diator, a former resident of Barangay Lilod Madaya, one of the 24 villages inside ground zero, or the most affected area, is now living in Area 4 of Bahay ng Pagbabago temporary shelter site in Sagonsongan.

The 24-square-meter house is not enough for her family of seven, Diator said.

She said her two sons needed their own room separate from the girls and from her and her husband. To solve it, they built an extension room.

“[But] the National Housing Authority told us to demolish it because it is ‘bawal’ (prohibited). But we don’t have a choice. We have very small space for our family,” Diator said.

According to a report of the United Nations Office for the Coordination of Humanitarian Affairs, 66,000 people remain displaced in Marawi.