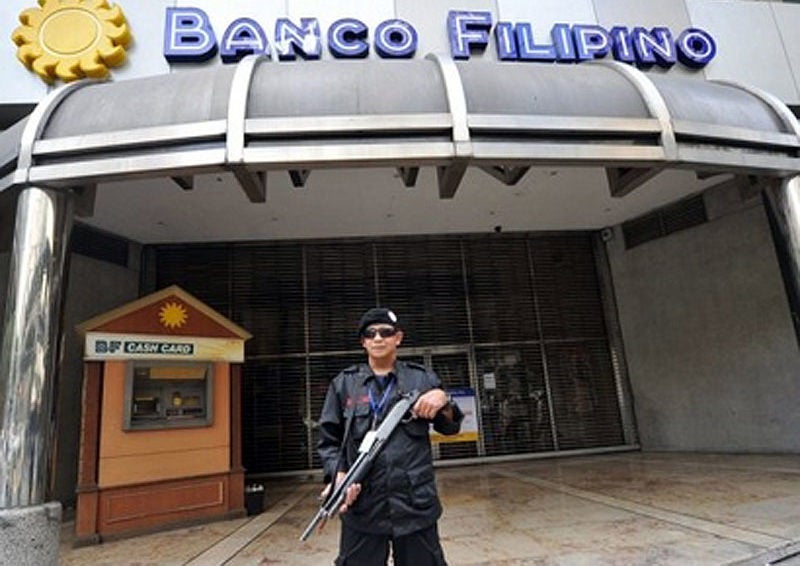 DAY IN COURT After years of legal battle between Banco Filipino and banking regulators, officers and directors of one of the
country’s largest banks in the early 1980s will be arraigned on Friday at theMakati Regional Trial Court to face charges in
connection with violations of various banking laws that led to its closure. —AFP

Former ranking officers and directors of the shuttered Banco Filipino will face the court today, Friday, after being charged by the Department of Justice with violating various banking laws, including granting a P350-million loan to a company of the bank’s owners despite the lender’s own financial woes.

Charged criminally in the Makati Metropolitan Trial Court (RTC) were Banco Filipino vice chair Albert Aguirre and director and executive vice president Maxy Abad. They allegedly failed to seek prior written approval of the board before granting the loan to Tierrasud Inc., which also owns stock in the bank, between 2001 and 2009.

(Editor’s Note: The print and earlier online version of this report erroneously stated that Yasay was among the respondents set for arraignment on Friday, June 21. )

Banking laws set tight limits and strict conditions on the granting of loans to “directors, officers, stockholders or related interests” (DOSRI) as lending to these “related interests” has historically been the cause of many bank failures.

After their arraignment at the Makati RTC, the accused will also be arraigned on a separate set of charges filed in the Manila RTC on July 1, 2019.

Documents obtained by the Inquirer show that the panel of DOJ state prosecutors, who conducted the preliminary investigation on the criminal complaint filed by the Bangko Sentral ng Pilipinas (BSP), recommended the filing of charges on June 27, 2017.

The recommendation was only approved by the DOJ prosecutor general on Feb. 14, 2019.

Abad and another Banco Filipino officer, executive vice president for accounting Roberta Afable, were also charged criminally with “willfully making false or misleading statements on a material fact” to the Monetary Board or to central bank examiners, when they reclassified losses in the books of the bank in the total amount of P6.8 billion incurred from 2003 to 2006, and recorded these as “deferred charges.”

The Banco Filipino officers, including executive vice president Catherine Aguirre-Hernandez, were also charged with conducting business in an “unsafe and unsound manner” by offering and accepting deposits from clients in return for high interest rates, and “approving and granting hazardous loans and adopting lax collection policies and practices—all in violation of the General Banking Law and several central bank directives.”

Arcenas, Aguirre, Samson, Abad, Rivera, Yasay and Adduru-Bowman were also criminally charged with “willful refusal” to submit the bank’s audited financial statements for 2002 to 2007 to the BSP despite several orders from the regulator.

The same Banco Filipino directors and officers were also charged criminally with either refusing to comply with or ignoring as many as 15 central bank orders, contained in Monetary Board resolutions, ordering the bank to address the issues raised by regulators.

The cases are the latest in a long history of legal battles between the central bank and Banco Filipino—one of the country’s largest banks in the early 1980s—before it was ordered shut by the regulator in 1985 due to alleged insolvency and illiquidity.

After the Supreme Court overturned the closure, the bank was reopened in 1994 but continued to struggle with constant regulatory issues until it was again ordered closed by the central bank in 2011 due to mounting losses.