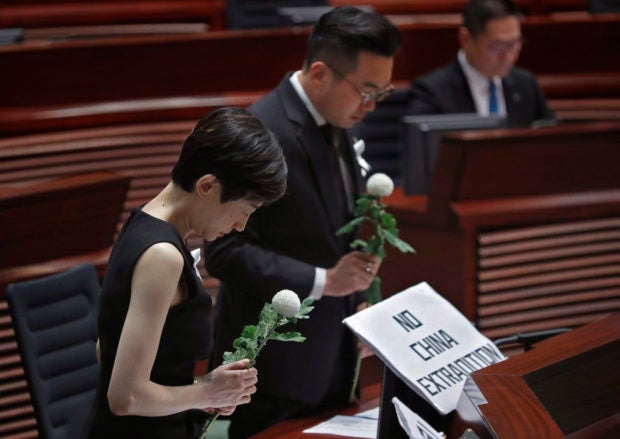 Pro-democracy lawmakers pay a silent tribute to the man who fell to his death on Saturday evening after hanging a protest banner on scaffolding on a shopping mall, at the Legislative Council in Hong Kong, Wednesday, June 19, 2019. Hong Kong lawmakers are meeting for the first time in a week, after massive protests over an extradition bill that eventually was suspended.(AP Photo/Vincent Yu)

Meanwhile, the Civil Human Rights Front, which organized massive marches on the past two Sundays, called for another protest on July 1, the anniversary of Hong Kong’s handover from British to Chinese rule in 1997.

Since last Sunday’s march on the government headquarters by an estimated 2 million people, the number of protesters in the area has dropped to just a few dozen. But Wednesday’s developments are the latest indication that the largest and angriest protests in the semi-autonomous Chinese territory in years aren’t over yet.

Hong Kong Chief Executive Carrie Lam has apologized for her handling of the extradition bill, which could be used to send suspects to mainland China for trial. She agreed to suspend debate, but has stopped short of scrapping the legislation, which critics said threatens the territory’s judicial independence.

“We are not asking (Lam) to come out and apologize. We are asking for real action,” Joey Siu from the City University Students Union said at a Wednesday news conference.

The group is part of the Hong Kong Federation of Students, which represents student unions at several universities. It has demanded that the government scrap the extradition legislation, investigate police tactics at a protest last Wednesday, cease calling the incident a riot, and release those arrested and drop charges against them.

Those terms have emerged as a bottom line for the suspension of protests. Other groups are also calling for Lam to resign for pressing ahead with the extradition legislation and mishandling the response to the protests. Lam has refused to step down.

The student group gave the government until 5 p.m. Thursday to meet the demands, saying otherwise protests would begin again in earnest.

Opponents of the extradition bill, who also include legal and business groups, said it puts critics of China’s ruling Communist Party at risk of torture and unfair trials in the mainland and further chips away at the “one country, two systems” framework under which Hong Kong has been governed since 1997.

That guaranteed the territory the right to retain its own legal, economic, and political system for 50 years, but the Communist Party under Chinese President Xi Jinping has been pushing ever-more aggressively to quiet independent voices in Hong Kong. Beijing has squelched all reporting on the protests in mainland media and accused foreign forces of stirring up disturbances in Hong Kong.

At a daily briefing Wednesday, Chinese foreign ministry spokesman Lu Kang said China was willing to communicate over the issues with foreign politicians.

However, he added, “if anyone tries to interfere in China’s internal affairs with preconceived bias and even malicious political motive, our attitude is very determined, that is we firmly oppose it.”

Meanwhile, opposition lawmakers on Wednesday grilled the city’s security secretary over allegations of police brutality. A motion of no-confidence over Lam’s handling of the legislation was expected but was likely to be rejected or boycotted by pro-government legislators, most of whom did not attend the questioning session.

The opposition lawmakers wore black with white ribbons pinned to their lapels. They put white chrysanthemums, another symbol of mourning, on their desks, and observed a few moments of silence for a protester who died in a fall last weekend.

The debate, aired online in both Chinese and English, was a reminder of the divide between Hong Kong, where officials are held publicly accountable and dissent is expected, and the Communist-ruled mainland, where such open criticism is not tolerated.

Security Secretary John Lee rejected suggestions that he should resign to take responsibility for police use of aggressive tactics, including beatings with steel batons and heavy use of tear gas. He also defended the decisions made on the scene.

Some lawmakers questioned the criticism, saying the police were concerned about their own safety when faced with hostile protesters, some of whom hurled bricks and other debris.

Pro-democracy lawmaker Gary Fan said police encircled some protesters without warning and fired four rounds of tear gas. The demonstrators “ran for their lives” into a building, Fan said.

“The people didn’t have anywhere to escape from the scene,” he said. “How can this be a minimal use of force?”

Lee reiterated Lam’s insistence that complaints against police would be handled through agencies established to deal with such issues.

Lam formally apologized Tuesday and said she was responsible for the extradition bill mess. The fact that she did not bow in apology was front-page news, with many in Hong Kong criticizing what they said was an apparent lack of contrition.

Lam has insisted the legislation is needed for Hong Kong to uphold justice and not become a magnet for fugitives. It would expand the scope of criminal suspect transfers to include mainland China, Taiwan, and Macau.

Samson Yuen, a professor at Hong Kong’s Lingnan University, said the extradition bill is like a “knife at the throat” for many in Hong Kong.

“There’s a lot of energy, emotion and passion and also anger,” he said in an interview. “It’s a total mobilization of society.” /kga

Read Next
Turkey’s Erdogan claims ex-Egyptian president was killed
LATEST STORIES
After winning title, time for LA Tenorio to give back to Batangas folk
‘Mia’: Rom-com with a cause a career-boosting showcase for Coleen Garcia
No.13 lucky for Orlando Bloom
The ties that bind: Why the guys of Black Eyed Peas prefer to stay together
How Yam handles flirtatious guys
MOST READ
Nadine Lustre’s phone stolen in Brazil
Gretchen Barretto’s daughter Dominique graduates magna cum laude from California college
Lights inside SMX hall flicker as Duterte rants vs Ayala, Pangilinan anew
Will you be the first P16 Billion Powerball jackpot winner from the Philippines?
Don't miss out on the latest news and information.