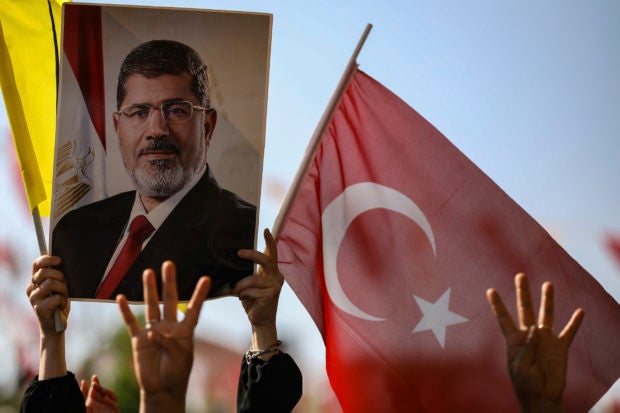 Supporters join Turkish President Recep Tayyip Erdogan, who attends funeral prayers in absentia for ousted former Egyptian President Mohammed Morsi, in poster, at Fatih Mosque in Istanbul, Tuesday, June 18, 2019. Funeral prayers were held in mosques across Turkey for Morsi, who had close ties to Erdogan. The former president, who was ousted by current President Abdel-Fattah el-Sissi in a military coup in 2013, collapsed in a courtroom in Egypt during trial on Monday and died. (AP Photo/Emrah Gurel)

ANKARA, Turkey — Turkish President Recep Tayyip Erdogan has claimed that former Egyptian President Mohammed Morsi did not die of natural causes but that he was killed.

During a speech in Istanbul, Erdogan cited as evidence that the deposed Egyptian president allegedly “flailed” in a Cairo courtroom for 20 minutes Monday and nobody assisted him.

The Turkish leader said Wednesday: “Unfortunately, Mohammed Morsi was on the ground of courtroom flailing for 20 minutes. No official there intervened. Morsi did not (die) naturally, he was killed.”

Erdogan said Turkey would do everything in its power to ensure Egypt faces trial in Morsi’s death. He also called on the Islamic Cooperation Organization to “take the necessary action” over Morsi’s death. /kga