Man buys town, renames it ‘Gay Hell’ in response to Trump admin’s ban on pride flags in US embassies

A rapper who grew up hearing people tell him to “go to hell” for being a homosexual, bought a small town named Hell in Michigan, USA, and officially renamed it “Gay Hell.”

Elijah Daniel stated that purchasing and renaming the town was a response to the Trump administration’s ban on allowing American embassies to put up pride flags, as per his tweet on Monday, June 17. 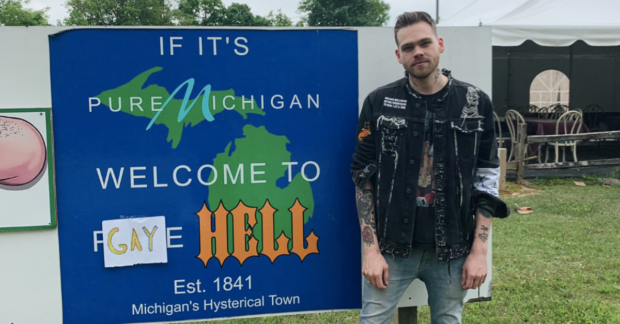 His first act as the town’s owner was to make rainbow-colored flags, which represent the LGBTQ+ community’s pride—the only flags that are allowed to be put up in the town.

“Gay Hell, [Michigan] has everything. A library, a place to lock your love in Gay Hell, and even a WEDDING CHAPEL TO GET GAY MARRIED IN HELL!” the rapper added.

Gay Hell, Mi has everything. A library, a place to lock your love in Gay Hell, and even a WEDDING CHAPEL TO GET GAY MARRIED IN HELL! pic.twitter.com/mt2RzgraEx

American cosmetics mogul Jeffree Star caught wind of the tweet and responded to Daniel’s post. “As a part time Michigan resident myself, I’d love to buy some land in Gay Hell! A cute pink mansion on a hill, nothing too fancy?” Star said.

This is not the first time Daniel has bought the town of Hell to become its mayor. He previously bought Hell for a day, back in 2017. During his first time as mayor, he banned heterosexual people from entering the town.

Hell lets anyone become its mayor for a day as long as they’re willing to pay the price of $100 to $110 (around P5,100 to over P5,700). The rights to become mayor of the town comes with novelty items from the town such as a shirt, devil horns and a proclamation naming the person as Hell’s mayor for that specific day, as per the town’s website.

Dads, moms give hundreds of free hugs at Pride parade in Pittsburgh