And U.S. and Chinese negotiators will resume talks before the leaders meet. 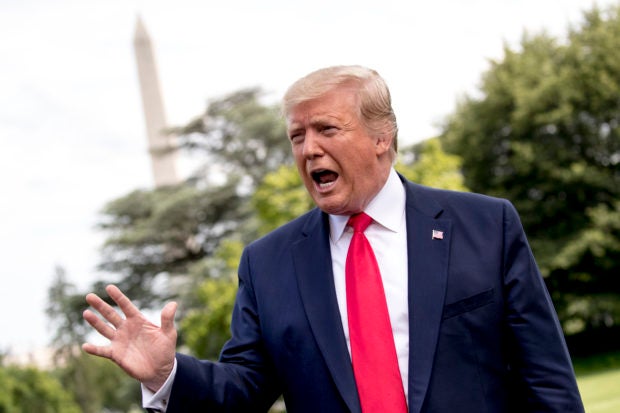 President Donald Trump speaks to reporters before boarding Marine One on the South Lawn of the White House in Washington, Tuesday, June 18, 2019, for a short trip to Andrews Air Force Base, Md., and then on to Orlando, Fla. for a rally. (AP Photo/Andrew Harnik)

Investors have been on edge since the world’s two biggest economies last month broke off talks aimed at settling a dispute over U.S. allegations that China steals technologies and forces foreign companies to hand over trade secrets.

Trump has already imposed 25% tariffs on $250 billion in Chinese imports.

And he’s preparing to target the $300 billion in Chinese imports that he hasn’t already hit with tariffs, extending them to everything China ships to the United States. China has retaliated with tariffs on U.S. goods.

“Had a very good telephone conversation with President Xi of China,” Trump tweeted. “We will be having an extended meeting next week at the G-20 in Japan. Our respective teams will begin talks prior to our meeting.”

The White House said in a statement that the two leaders discussed leveling the playing field for U.S. farmers, workers and businesses through a “fair and reciprocal” economic relationship.

The White House said that includes addressing barriers to trade with China and achieving meaningful reforms that can be verified and enforced.

The administration provided no details about talks between the negotiating teams.

One of Trump’s top economic advisers, Larry Kudlow, would not speculate on what will happen at the Trump-Xi meeting on the sidelines of the G-20.

“Talk is better than no talk,” said Kudlow, director of the National Economic Council.

He said the administration will push China to make fundamental changes to its economic policies.

“We want structural changes on all the items — theft of (intellectual property), forced transfer of technology, cyber hacking, of course trade barriers,” he said. “We’ve got to have something that’s enforceable.”