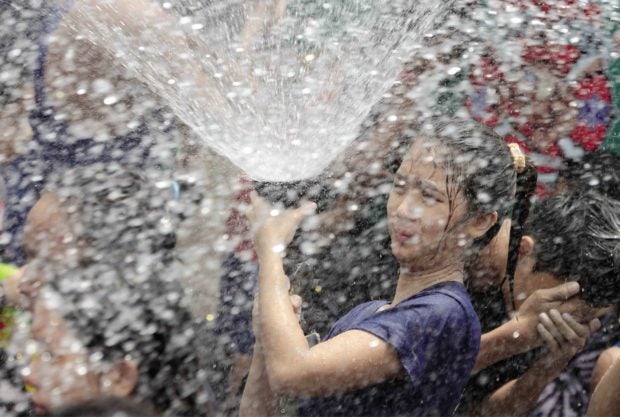 MANILA, Philippines — The San Juan City government said on Monday that it would forge ahead with the celebration of its annual Wattah Wattah Festival despite a water shortage problem in parts of Metro Manila that could worsen as dam levels continue to drop.

Mayor Guia Gomez said in a press briefing that rather than forgo the celebration altogether, they decided to refashion the festival, which began as a commemoration of the feast day of the city’s patron saint, St. John the Baptist.

While previous Wattah Wattah festivities culminated in a parade of about 50 fire trucks, each one dousing residents and tourists with free-flowing water, the government now plans to deploy throughout the week up to three fire trucks daily to areas in the city beset by water interruptions.

Only 16 fire trucks, blessed by the parish priest and representing the festival’s 16-year history, would be used during the grand celebration or basaan — said to imitate the act of baptism — on June 24.

There are still nine barangays in San Juan that experience water interruptions between 5 p.m. and 5 a.m. because of their high elevation, according to city councilor Vincent Pacheco, Wattah Wattah committee chair.

Fire trucks from the city government and Manila Water Co. Inc., the concessionaire in charge of the city, will deliver water to residents in the affected areas between 3 and 5 p.m. until June 24.

In March, parts of Metro Manila experienced a water crisis after La Mesa Dam’s water level dropped to its lowest, with Manila Water saying it could not keep up with consumer demand.

Rather than ignore the problem, San Juan officials appeared ready to embrace the shortage as an opportunity to deepen the meaning of the festival and turn it into an opportunity to highlight the need to conserve water.

“While the city has already been advocating water conservation campaigns, we think it is about time that the festival itself will highlight the environmental aspect,” said City Environment and Natural Resources Office head Dante Santiago.

He added that volunteers who used to assist in the “watercade,” the city-wide parade with floats, street dancing and the basaan, would be sent instead to the affected barangays. —With a report from Maxine Sta. Cruz