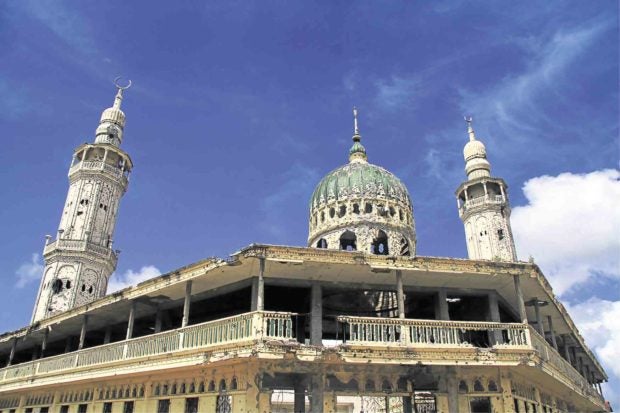 PLACE OF WORSHIP. The five-month battle between government forces and Islamist militants who laid siege to Marawi in 2017 did not spare the city’s places of worship, like the Grand Mosque, which were destroyed or heavily damaged following gunfights and airstrikes. —RICHEL V. UMEL

Reynaldo Barnido, executive director of Duyog Marawi, said it was only proper for the mosques to be rebuilt first because majority of residents in Marawi, the country’s only Islamic city, were believers of Islam.

Duyog Marawi is the social action response of the prelature and the Redemptorist missionaries to the Marawi siege. “Duyog” means accompaniment.

“In deference to our Muslim brothers and sisters, we will wait until the mosques are restored before we reconstruct St. Mary’s Cathedral,” Barnido said.

At least 25 mosques at the city center, including the Grand Mosque, the largest in the city, were destroyed or damaged during the battle between Islamist militants and government forces from May to October 2017. 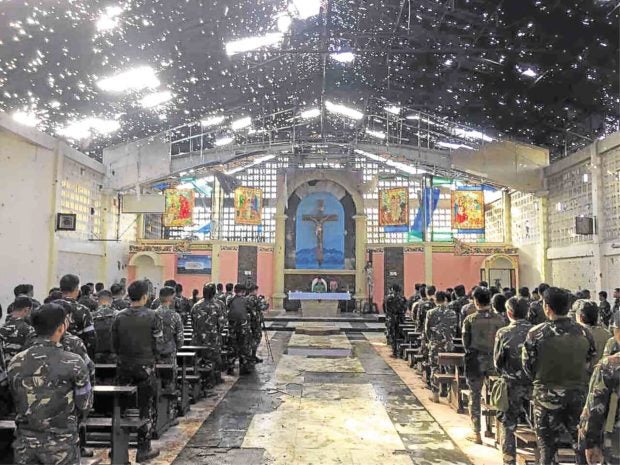 MASS FOR TROOPS. In this photo taken in October 2017, government soldiers attend Mass in the Catholic church desecrated by members of the Maute and Abu Sayyaf groups during the Marawi siege. —PHOTO COURTESY OF JOINT TASK GROUP RANAO

Marawi Bishop Edwin dela Peña said St. Mary’s Cathedral, which used to serve as the seat of the Marawi prelature, was no longer structurally sound as a result of the siege.

The cathedral will be demolished and reconstructed after Marawi has recovered from the impact of the war, the prelate said.

The Prelature of Marawi is temporarily holding office in Santo Tomas de Villanueva Parish in Balo-i town, Lanao del Norte province, which is less than an hour away from Marawi by car.

On May 23, 2017, the Maute and Abu Sayyaf groups seized Marawi, triggering the war that displaced more than 350,000 civilians.

President Duterte imposed martial law hours after the siege, which remains in effect until the end of this year.

Over 1,100 individuals, mostly Islamist militants, were killed in the war that destroyed the core of Marawi.

Two years after the siege, more than 100,000 civilians remained displaced and are still suffering in squalid tent cities or transitional shelters, or staying with their relatives.

To date, the rehabilitation of ground zero, the former battle area now referred to by the government as the “most affected area,” has yet to start.

The Task Force Bangon Marawi, an intergovernmental body tasked to rehabilitate the war-torn city, is still in the debris clearing phase even as experts continue to search for over three dozen unexploded bombs fired by military aircraft during the conflict.

Hamidullah Atar, the Sultan of Marawi, said that two years after the Marawi siege, victims continued to reel from the mental, emotional and financial torture of the fighting that changed the course of their lives forever.

Atar said the first step toward healing was for them to be allowed to return to their homes at ground zero.