Mexico steps up revisions amid US pressure over migrant flow

The National Migration Institute said 1,000 immigration agents had been deployed in the north and south of Mexico.

The deployment comes as Mexico faces heightened pressure from the U.S. to reduce the surge of mostly Central American migrants through its territory. 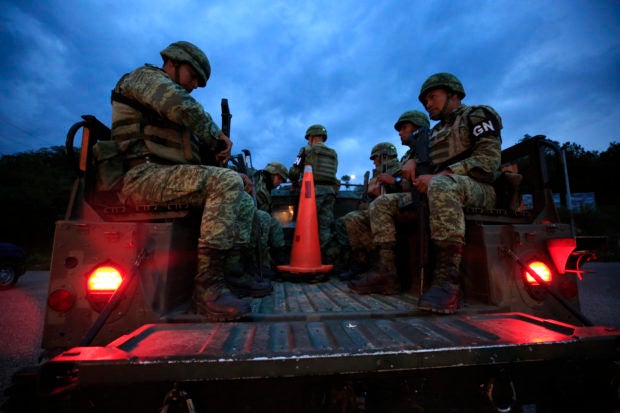 Soldiers forming part of Mexico’s National Guard board a truck to patrol back roads used to circumvent a migration checkpoint, in Comitan, Chiapas state, Mexico, Saturday, June 15, 2019. Under pressure from the U.S. to slow the flow of migrants north, Mexico plans to deploy thousands of National Guard troops by Tuesday to its southern border region. (AP Photo/Rebecca Blackwell)

Mexico plans to position 6,000 National Guard troops by Tuesday to its southern border with Guatemala.

The Associated Press saw nearly 10 armed soldiers at a checkpoint near Ciudad Cuauhtémoc, in Chiapas state, wearing black armbands to indicate they are part of the National Guard.

At another checkpoint just north of Comitán in Chiapas, more than a dozen apparent National Guardsmen drove around backroads in the rain and dark, looking for migrants and human smugglers.

In the Gulf coast state of Veracruz, the National Migration Institute said 791 people were taken Saturday to a migration facility and that drivers of the tractor-trailer trucks transporting them were arrested.

Migrants are routinely transported through Mexico in packed semis, sometimes in dangerous conditions without food or water or sufficient fresh air.

Government video showed officials breaking the lock on the door of one cargo truck and helping migrants out.

The institute described the detentions and arrests in Veracruz as part of a strategy implemented by its new commissioner, Francisco Garduño.

The former prisons director assumed the post Friday, taking over for a sociologist and academic.

Outside Comitán on Sunday, some roadblocks and checkpoints were manned by multiple soldiers and police identifying as National Guard.

At one, immigration agent José Ángel Ramírez welcomed the help of the National Guard.

“We don’t have a way to stop so many and the traffickers pass everywhere,” said Ramírez, who was the only agent on duty at his checkpoint.

One of the Hondurans, a farmer named Armando who was traveling with a daughter and nephew, broke into tears while saying he’d be killed if returned to his country.

After several hours, the Hondurans were transported to a Mexican detention center for migrants.

The security force is still taking shape and was originally established with the goal of stemming endemic violence. Last year saw the highest number of murders in at least 20 years in Mexico.

Mexican soldiers have long been authorized to search vehicles for drugs or weapons, explained one of the newly minted National Guard officers, who declined to give his name.

Now, he said, they can detain drivers or others suspected of helping the undocumented move through Mexico. /gsg