HONG KONG – Hong Kong citizens marched for hours Sunday in a massive protest that drew a late-in-the-day apology from the city’s top leader for her handling of legislation that has stoked fears of expanding control from Beijing in this former British colony.

Nearly 2 million of the city’s 7 million people turned out, according to estimates by protest organizers.

Police said 338,000 were counted on the designated protest route in the “peak period” of the march. A week earlier as many as 1 million people demonstrated to voice their concern over Hong Kong’s relations with mainland China in one of the toughest tests of the territory’s special status since Beijing took control in a 1997 handover. 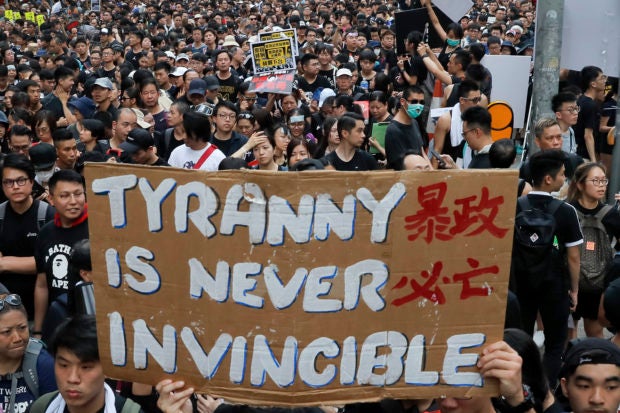 Tens of thousands of protesters carry posters and banners march through the streets as they continue to protest an extradition bill, Sunday, June 16, 2019, in Hong Kong. Hong Kong residents were gathering Sunday for another mass protest over an unpopular extradition bill that has highlighted the territory’s apprehension about relations with mainland China. (AP Photo/Kin Cheung)

After daybreak Monday, police announced that they want to clear the streets of protesters in the morning.

Soon after, police lined up several officers deep and faced off against several hundred demonstrators on a street in central Hong Kong. The police asked for cooperation in clearing the road.

Protesters replied with chants, some kneeling in front of the officers.

Crowds had gathered well after dark outside the police headquarters and Chief Executive Carrie Lam’s office. On Saturday, Lam suspended her effort to force passage of the bill, which would allow some suspects to be sent for trial in mainland China.

The move did not appease Hong Kong residents who see it as one of many steps chipping away at Hong Kong’s freedoms and legal autonomy.

Protesters are also angered over the forceful tactics by police in quelling unrest at a demonstration on Wednesday.

Periodically, the shouts of the protesters standing shoulder-to-shoulder in front of the police headquarters would crescendo into a roar that reverberated through the narrow concrete canyons of the red-light district of Wanchai.

In a statement issued late Sunday, Lam noted the demonstrations and said the government “understands that these views have been made out of love and care for Hong Kong.”

“The chief executive apologizes to the people of Hong Kong for this and pledges to adopt a most sincere and humble attitude to accept criticisms and make improvements in serving the public,” it said.

Not enough, said the pro-democracy activists.

“This is a total insult to and fooling the people who took to the street!” the Civil Human Rights Front said in a statement.

The marchers want Lam to scrap the extradition bill, which is supported by the communist leadership in Beijing, and to resign.

The crowds filled a wide thoroughfare and side streets paralleling the waterfront of Victoria Harbor as tourists and shoppers who drive much of the Asian financial hub’s economy looked on. /gsg

Read Next
Massive protests draw apology from Hong Kong leadership
EDITORS' PICK
Heads may roll at BOC, says Palace if sugar smugglers are allowed to use recycled import permits
What to watch out for when selecting a video surveillance solution
Apple warns of flaw that lets hackers into iPhones, Macs
House energy committee chair Arroyo bats for cheap electricity
46% of schools nationwide to have full face-to-face classes on Aug. 22
vivo brings to the Philippines a powerful smartphone with a slimmer body, the vivo Y02s for only PHP 6,499
MOST READ
DepEd to give teachers P5K cash allowance within first week of classes
LOOK: Miel Pangilinan dazzles in glittery pre-debut shoot
DOJ indicts bank officer in $2.1 billion Wirecard fiasco
PH importing sugar after all: Marcos okays 150,000 MT
Don't miss out on the latest news and information.