For this son of a scrap dealer, ’sablay’ means success | Inquirer News

For this son of a scrap dealer, ’sablay’ means success 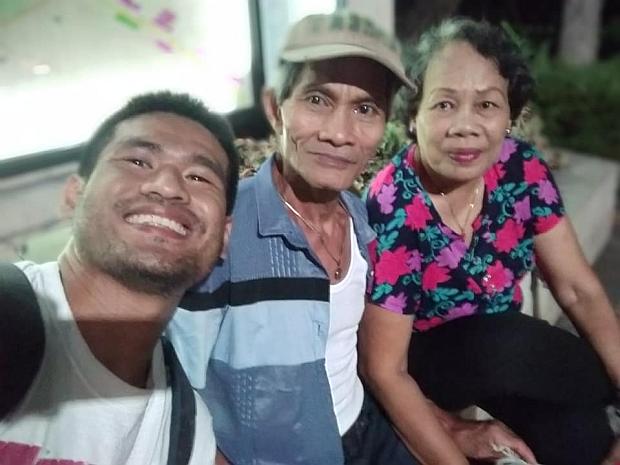 MANILA, Philippines — For students of University of the Philippines (UP), the “sablay” is more than a piece of garment worn during graduation rites.

It represents sleepless nights, multiple breakdowns, perfect exam scores, failing exam scores, barely-there-but-at-least-I-passed exam scores, going to class without taking a bath, and everything else in between.

It took 13 years for Thomas John Tenedero, or TJ, to make sure that he would be getting his sablay. So when he finally received the news that he would officially graduate this June, the feeling of success was indescribable.

Living beside the tracks

TJ spent all his life living beside the railroad tracks, struggling to make ends meet with his father, who worked as a scrap collector; multiple nights of breakdowns, and juggling his time between studies and work.

At 2 years old, he was already familiar with the sound of an approaching train.

[The train was my alarm clock at dawn on school days. Then at night, it’s bedtime after the train has passed. My bed would shake whenever the train would pass.]

Tenedero said living beside the rails exposed him to the reality of poverty and the issues that go along with it. Many days he was scared to go home — not because it was dark and the approaching trains posed a danger, but because of drunkards on the way who were behaved very unpredictably.

[What’s really hard here is growing up in an area where the people are poor and yet they still have vices. People here follow a certain cycle of life — they will either keep on studying or get married at an early age. Others are content to just get married early and not finish their studies, even if they could still keep pushing.]

Tenedero, however, credited his early exposure to reality as among the reasons he learned the value of perseverance and resilience.

Living off of scraps

It was beside the railroad tracks where Tenedero started crafting his dreams as he grew older.

His father, Estanislao, a scrap collector, would usually bring home books and other reading materials for him.

[Because he was a scrap collector, he was often able to buy books and other reading materials. That how I came to like reading and exploring things that I had not learned before.]

As a scrap collector, Tenedero’s father earned P200 to P700 per day — P1,000 on a rare good day — a small amount considering that the job involved risking his life avoiding fast-approaching trains.

[He used to work in a knitting factory in Calamba, Laguna. But he decided to get into dealing in scrap bottles and old newspapers because he wanted to make more money. His salary at the factory was small. It was not enough.]

[Papa is always alert because he buys his stuff along the rails. It’s risky. The trolley he’s using has been several times by a train. And he himself was almost hit by a train several times.] 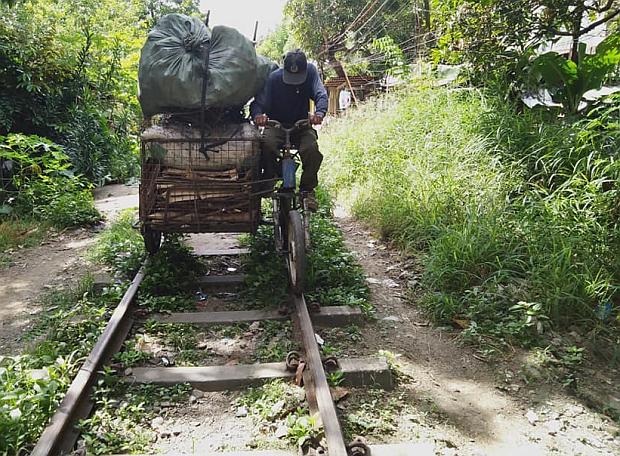 Estanislao Tenedero had to scrape up money for the first year tuition of his son, Thomas John, at UPLB. (Photo by THOMAS JOHN TENEDERO)

Tenedero’s family also faced a number of problems: His mother fell ill, forcing them to sell all they could from their little home beside the rails, and his father fell prey to vices, particularly drinking.

During these moments, the people they expected to help them did not even bother to ask how their family had been keeping up.

[There were times when I felt angry at Papa, but in time I learned to understand everything. I understood that it was all part of our being poor.]

For Tenedero, 2005 turned out to be a big year. It was when he learned about the University of the Philippines in Los Baños, Laguna while visiting an aunt who lives near the university.

Then a 13-year-old Grade 5 student, Tenedero learned that studying at UPLB would cheaper than other schools, and the idea of studying in a premier university sparked his interest.

After graduating from the Los Baños National High School, Tenedero found his dream of studying in UP within reach.

He took the UP College Admission Test. Unfortunately, he failed.

[At first, I was really hurt because my plan since 2005 just burst like a bubble. I studied hard for that somehow. I was also embarrassed because Papa and Mama had been very supportive when I told them I was taking the UPCAT.]

Thanks, however, to the university’s reconsideration policy, Tenedero was able to enroll at UPLB, although in a different course — Agricultural and Applied Economics.

Then he said he quickly realized that passing the UPCAT was actually the easiest part.

His father had to work extra hard to scrape up his tuition for his first year in school.

To his relief, Tenedero later qualified for the free tuition program of the university.

Still, there more things to worry about: He had to look for a dormitory, a source of daily allowance, budget for projects, and the use of computer units outside the university for class outputs, among many other concerns that needed money.

So he applied as a student assistant in one of the offices in the university.

[There were times in my life when I really had nothing. There were many times when I really had no money for food, for handouts, for paying the dorm rent. But I was always blessed because there would always be a blessing that would come along or a friend — a UP student or alumni — would treat me to food. That’s really how it is at UP — they help each other.]

The academics were no easier for Tenedero either. He had to repeat some subjects severals — a statistics course four times and take a chemistry course seven times, among others.

The pressure of financial constraints and academics took their toll on Tenedero. He became depressed.

“Nawalan na ko ng pag-asa and ultimo, nagka bipolar disorder na ako and I was depressed,” he said. “ero, mabait si God eh. He was the one who helped me in those dark times.”

[I lost hope and I had bipolar disorder and I was depressed. But God is good. He was the one who helped me in those dark times.]

For UP students, the sablay serves as a goal. Getting to wear it during the graduation rites means reaching the goal, achieving success.

Ironically, “sablay” in Filipino means missing a goal or falling off the mark — and certainly, Tenedero had his fair share of misses.

Because he had to repeat some subjects several times, he was not able to finish his course on time.

[Through the years, as I stayed longer in the university, Papa seemed to be getting impatient. He would often ask me when I would graduate.]

Then in December 2018, Tenedero found out he was finally graduating, that he will march this June to receive his diploma. 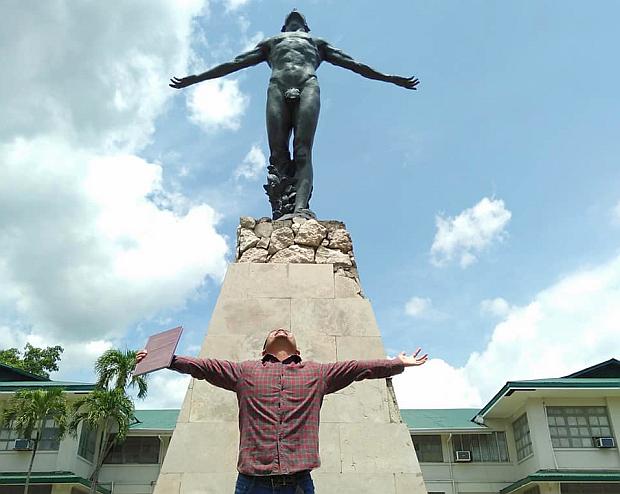 Thomas John Tenedero strikes an ecstatic pose in front of the Oblation at UP Los Baños. (Photo by THOMAS JOHN TENEDERO)

[I really felt that a burden has been lifted off my parents’ shoulder. I’m really the only one they’re relying on.]

Tenedero, now 27 years old, works as an administrative office assistant in the Department of Social Sciences in UPLB, as he awaits his graduation rites on June 22. 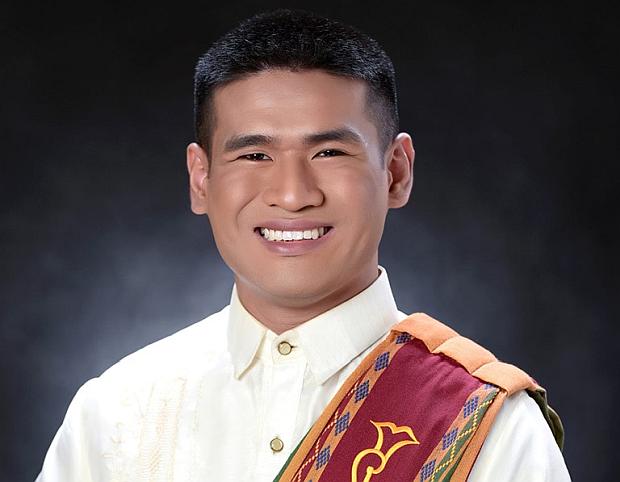 The UPLB graduation rites will be on June 22, 2019. But Thomas John Tenedero, along with other graduates, got to wear their ‘sablay’ during the picture-taking for the yearbook. (Photo from THOMAS JOHN TENEDERO)

He also plans to take a masters degree in creative writing in UP Diliman.

Tenedero never blamed living beside the tracks or selling scrap as the reason for his delayed success.

Rather, these served as his inspiration to be a stronger person and be more appreciative of his parents.

[I also urge the youth to read a lot of books because reading opens your mind to possibilities and helps you form a dream and makes you see how big the world is. Let us open our minds to knowledge. And most important, let’s not be content to say that, because we’re poor, that’s what we will always be. That’s not true.]