Leaderless and livid: The youngsters on Hong Kong front lines 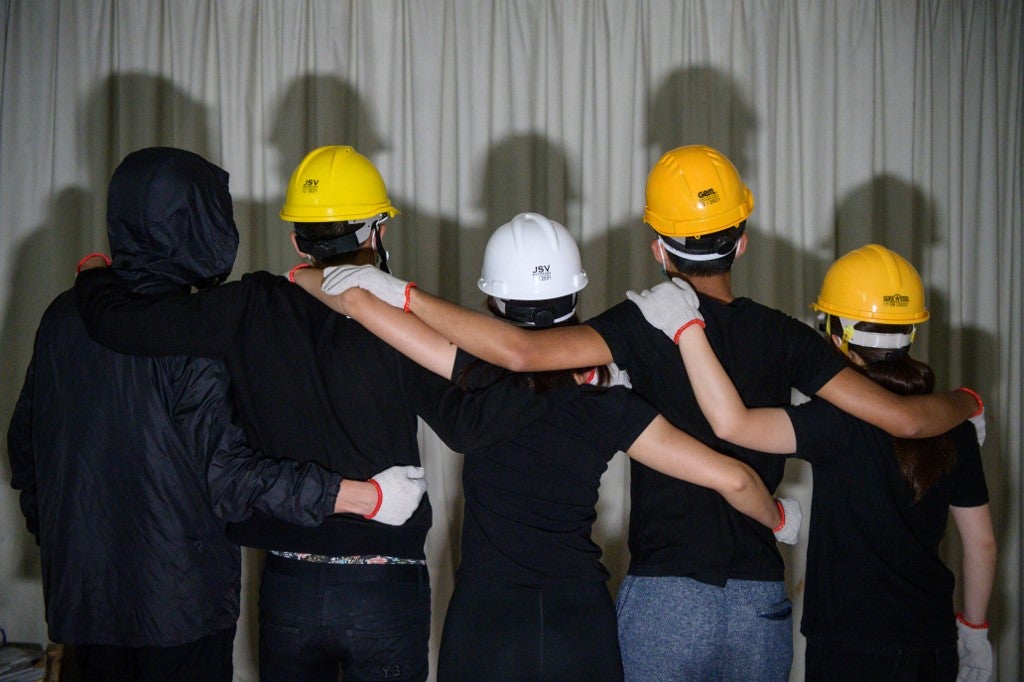 This picture taken on June 14, 2019, shows a group of student protesters posing while wearing their protective clothing during an interview with AFP in Hong Kong, who took part in the protests on June 12, which saw police armed with tear gas and rubber bullets. (Photo by Anthony WALLACE / AFP)

HONG KONG — Young Hong Kongers who marshalled the fight against a police force that was armed with tear gas and rubber bullets have spoken of how they were pushed into embracing more confrontational tactics by the failure of years of peaceful protests.

In a series of interviews with AFP, the young men and women — most of them university students on leafy campuses — said they had become disillusioned with marches and civil disobedience failing to sway the city’s largely unelected pro-Beijing leadership.

And with key leaders of earlier pro-democracy movements now languishing in jail, they have switched to small, leaderless cells in a bid to evade capture.

Hong Kong witnessed unprecedented scenes on Wednesday as youngsters clashed with riot police outside parliament to stop lawmakers debating a hugely unpopular bill that would allow extraditions to the Chinese mainland.

One of those on the front lines, 18-year-old student Sharon, said the moment she felt peaceful rallies no longer worked came three days earlier.

That day a record crowd — organizers say more than a million — marched peacefully through the streets of the international finance hub calling for the bill to be scrapped.

But shortly before midnight, Sharon’s phone lit up with a statement from the government saying the bill would go ahead.

“I suddenly had this realisation that even though one million people marched, there wouldn’t be an impact,” she said, asking — like the other students — not to be identified.

For people like Sharon, it was time to switch tactics in a city where democracy activists have held huge annual marches since 2003 but made limited progress.

Andrew, 22, said he and a group of seven friends had gone to Wednesday’s protests prepared for police tear gas and pepper spray.

They brought equipment like goggles, gloves and cling film — to protect their arms from tear gas burns — and sanitary pads to staunch any bleeding.

But he described their actions as organic and spontaneous, with small groups of trusted friends acting together within a larger mass, without taking directions from any centralized leadership.

“No one is going to announce that I must use force or stand on the front line,” he said.

He said the decision to charge police and try to reach parliament happened without anyone making any order.

“It might not be up to you to choose,” he explained as he described the crowd dynamic that day.

“It could be because of the passion of the crowds or what police officers have done (to make you very angry).”

Those tactics contrast with 2014 when similar crowds of young people took over key intersections in Hong Kong for more than two months calling for the right to elect the city’s leader.

Apart from occasional clashes with police, the so-called “Umbrella Movement” protests were peaceful and orderly and had key leaders.

But it failed to win any concessions and many of the movement’s figures — like student leader Joshua Wong and academic Benny Tai — are currently in jail.

“We choose this option because what we’ve done so far isn’t enough to make the government feel the people’s anger and discontent towards this bill. That’s why we are choosing to charge,” Andrew said, admitting it would be easier to coordinate if they had leaders but that few would want to take that risk.

Police have since labelled the protest a riot with a senior superintendent usually involved in organized crime investigations calling those involved “organized, premeditated, prepared, radical and violent people”.

The city’s police chief has defended his officers, saying potentially deadly projectiles like bricks and metal poles were being thrown.

He has received the backing of the city’s pro-Beijing leader Carrie Lam, who also called demonstrators rioters and refused to apologize for the clearances, even as she suspended the bill on Saturday saying she had misjudged the public mood.

In recent days police and Lam have faced a growing backlash over accusations officers used excessive force against the crowds.

Rights activists and influential legal groups have called the response disproportionate, videos of the most violent police beatings have gone viral and parents have rallied holding signs reading: “Don’t shoot our kids.”

Chris, a protester who went into battle on Wednesday with the phone number of a lawyer written on his stomach in case of arrest, said he believes there has been a sea-change among Hong Kong’s often conservative public.

“Those who had been a bit squeamish or resistant to more radical acts in Hong Kong society are starting to slowly accept them,” he said.

Andrew, who said he was beaten by police batons, agreed.

“People wearing suits and professional types, they would come over to the supply stations set up further back and ask what we needed,” he recalled.

The possibility of jail and arrest has weighed on the protesters as they study for degrees.

But Leung, a student who said she’d been to all previous protests in recent years, said she felt her generation had “nothing to lose” at this point.

“I’d cast my worries aside. At the scene, I feared pain more than arrest,” she recalled.

For Andrew, his fear of arrest or a hit to future job prospects is eclipsed by what the extradition law would mean for Hong Kongers.

“Even if I chose comfort and became a banker, when this law is passed, I’d still be under threat,” he said. “If you think about it realistically, you’re just waiting to be attacked.”