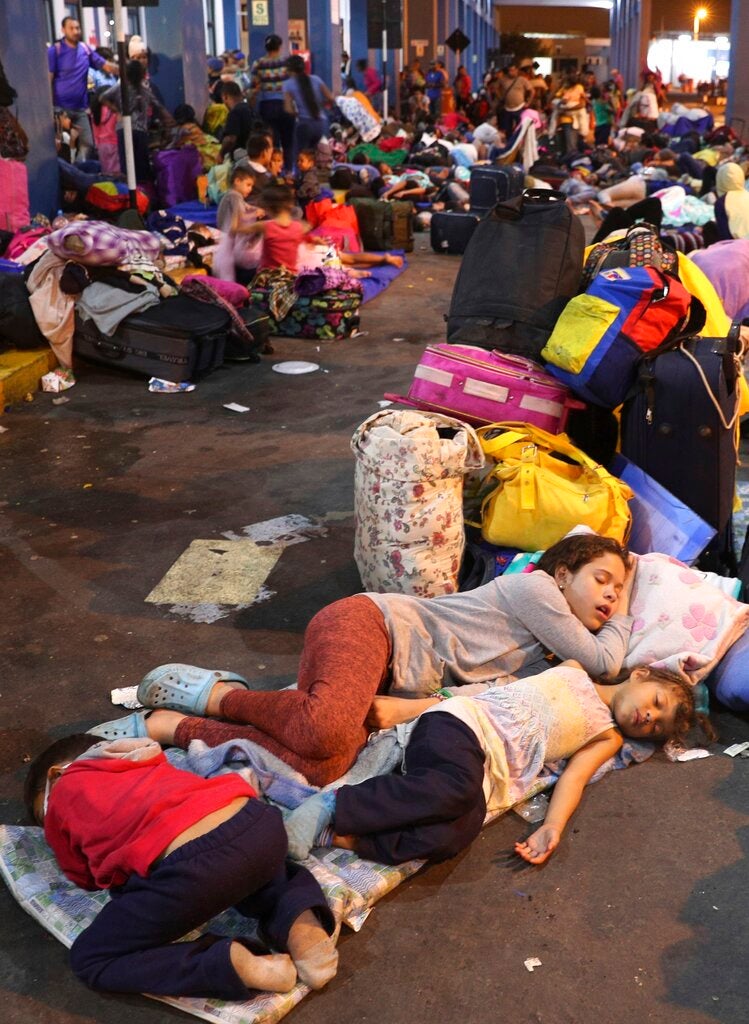 Venezuelan migrant children sleep while waiting with their parents to pass migration controls before the deadline on new regulations that demand passports from migrants, in Tumbes, Peru, Friday, June 14, 2019.  (AP)

AGUAS VERDES, Peru — Tired and thirsty, Betania Ramírez crossed into Peru on Friday with her 1-year-old girl in her arms and her 8-year-old boy beside her.

Ramírez has no friends or relatives in Peru, and some of her luggage was stolen as she crossed two countries in cargo trucks and on foot from her home in western Venezuela. But as she finished the latest leg of her 1,500-mile (2,414-kilometer) journey, she was grateful she had made it to her destination on time – just hours before Peru started imposing stricter entry requirements on Venezuelan migrants and refugees.

“We are now in God’s hands,” Ramirez said, after passing through a border post in the region of Tumbes. “We walked down country roads, we slept on the streets, we got robbed, but thankfully I did not get sexually assaulted.”

With its relatively stable economy and flexible immigration laws, Peru has become a main destination for millions of Venezuelans escaping hyperinflation, medical shortages and political repression at home. But on Saturday, the South American nation will begin demanding passports and visas from Venezuelan migrants — requirements that many will not be able to meet.

The new demands have prompted thousands of poor migrants like Ramírez to make a desperate dash for the Peruvian border, where they can still enter before the weekend begins by presenting national ID cards.

The agency was “supporting and complementing the efforts of Peruvian authorities as we face the largest number of Venezuelan people coming to Peru so far,” said UNHCR Information Officer Regina de la Portilla.

But at daybreak on Friday, hundreds were already standing in new lines outside the border post or sleeping on the sidewalk as they waited for immigration officials to check their IDs.

“My daughter came to Peru a year ago, and she sent for me,” said Leyda Murillo, an elderly migrant who was waiting in the queue. “You can’t find medicines in Venezuela, and people are dying, that’s why I decided to leave my country.”

Many more migrants were still on their way to the Peruvian border, making one last push through Colombia and Ecuador to arrive before the requirements were implemented.

Marianni Luzardo, a mother of two, was in the Ecuadorean city of Tulcan on Thursday, which is some 500 miles (805 kilometers) away from Peru’s northern border. She said it took her 16 hours to cross the Colombian-Ecuador border due to the large numbers of Venezuelans heading south.

“In Venezuela it is almost impossible to get a passport,” Luzardo said. “We need to get to Peru soon.”

According to Peruvian authorities, more than 820,000 Venezuelans have settled in Peru since 2016 of which 270,000 have sought refugee status.

Peruvian President Martín Vizcarra has said that the new entry requirements will make immigration “safer and more orderly” and that the large influx of Venezuelan immigrants was making it harder for Peruvians to find jobs.

But human rights groups in the country have criticized the move, describing it as an attempt to lessen the numbers of needy people who are entering the country.

In a letter published earlier this week, Miguel Cabrejos, the president of Peru’s Catholic Bishops Conference, warned that the requirements “present an imminent danger” to migrants who might be tempted to enter the country illegally. Meanwhile, Amnesty International said they will not be enough to stop desperate people from trying to cross the border, noting that passports were prohibitively expensive and take months to process in Venezuela.

A poll conducted in the Peruvian capital of Lima in April found that two-thirds of residents had a negative perception of Venezuelan migrants.

But that idea has been strongly disputed by Venezuelans, some of whom have opened their own businesses.

“Venezuelans here work very hard,” said Jorge Macchia, a street vendor who sells empanadas in the streets of Lima and noted that his family has been affected by new requirements.

“My wife and my two daughters are on their way to Peru,” he said. “But I’m not sure if they will make it on time.” 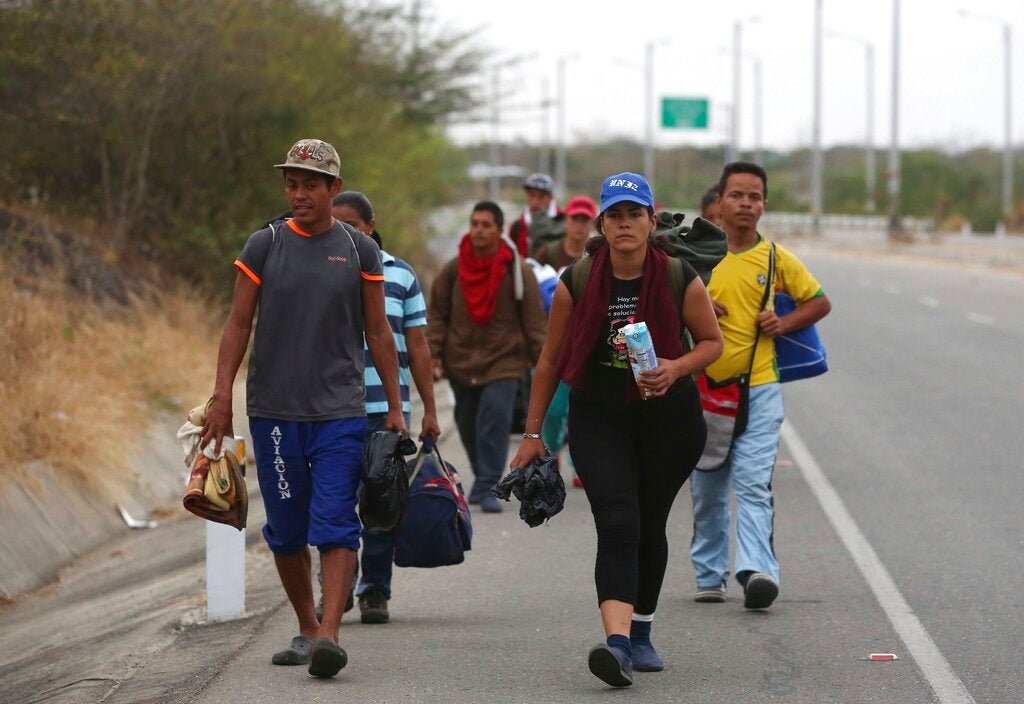