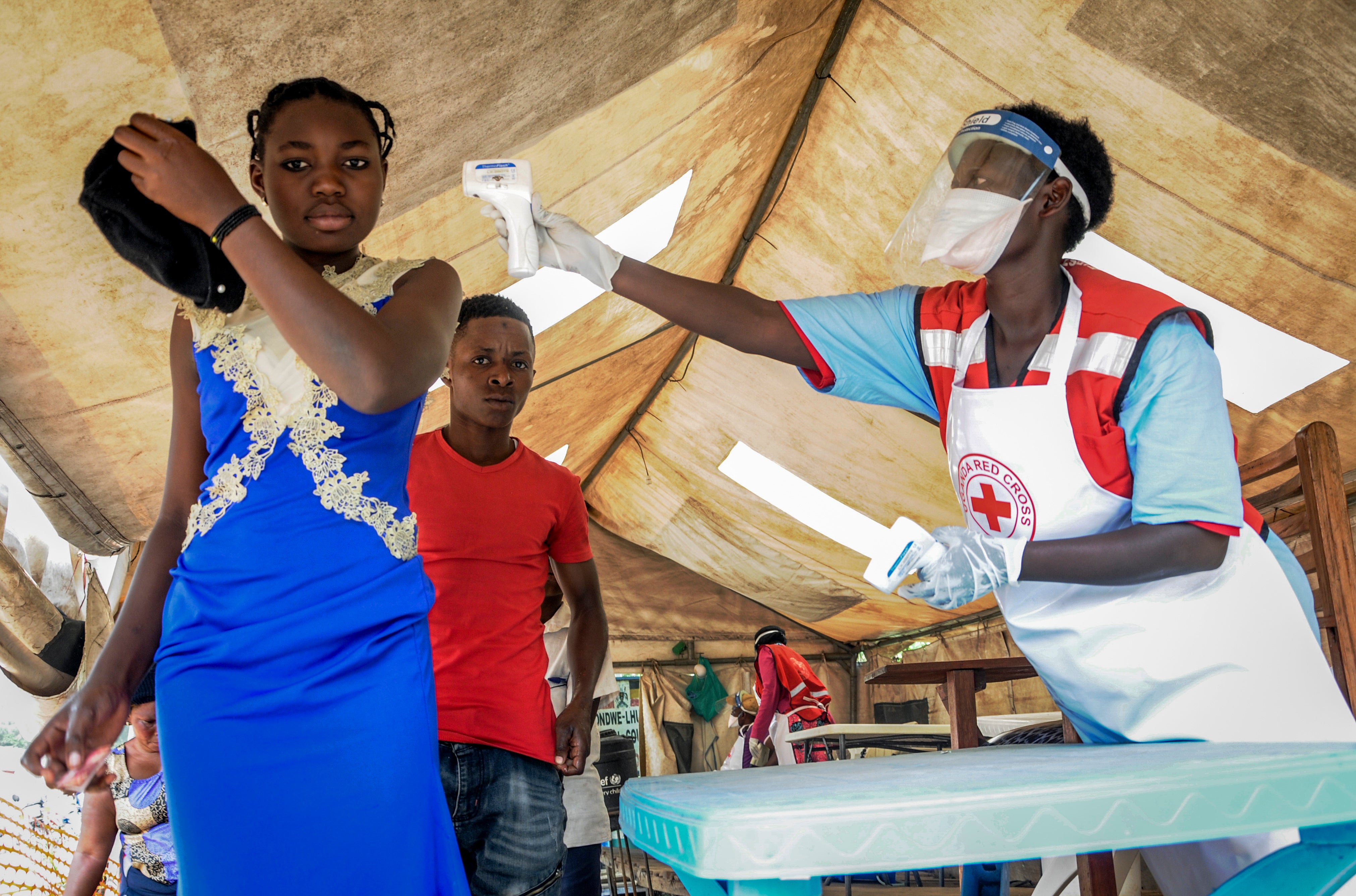 People coming from Congo have their temperature measured to screen for symptoms of Ebola, at the Mpondwe border crossing with Congo, in western Uganda Friday, June 14, 2019. In Uganda, health workers had long prepared in case the Ebola virus got past the screening conducted at border posts with Congo and earlier this week it did, when a family exposed to Ebola while visiting Congo returned home on an unguarded footpath. (AP Photo/Ronald Kabuubi)

GENEVA  — The World Health Organization on Friday said the Ebola outbreak in Congo — which spilled into Uganda this week — is an “extraordinary event” of deep concern but does not yet merit being declared a global emergency.

The U.N. health agency convened its expert committee for the third time to assess the outbreak, which some experts say met the criteria to be designated an international emergency long ago.

This outbreak, the second-deadliest in history, has killed more than 1,400 people since it was declared in August. Three members of the family who brought the virus into Uganda have died after attending the burial of an infected relative, a popular pastor, in Congo.

Speaking to journalists after the meeting, Dr. Preben Aavitsland, the acting chair of the committee, announced that the outbreak is “a health emergency in the Democratic Republic of the Congo” but that the situation should not be declared a global one.

For such a declaration, an outbreak must constitute a risk to other countries and require a coordinated response. The declaration typically triggers more funding, resources and political attention.

Aavitsland said the committee was “deeply disappointed” that WHO and the affected countries have not received the funding needed to stop the outbreak and delivered a blunt message to donors: “Step up.”

WHO said $54 million is needed.

Aavitsland added that declaring an emergency could have “unintended consequences” such as airlines stopping flights or governments closing borders.

“It was the view of the committee that there is really nothing to gain by declaring a (global emergency) but there is potentially a lot to lose,” he said.

The outbreak, occurring close to the borders of Uganda, Rwanda and South Sudan, has been like no other. Mistrust has been high in a region that had never faced Ebola before and attacks by rebel groups have undermined aid efforts. Several health workers have been killed.

On Thursday, WHO’s emergencies chief acknowledged the agency has been unable to track the origins of nearly half of new Ebola cases in Congo amid the challenges, suggesting it doesn’t know where the virus is spreading.

“I respect the advice of the emergency committee but do believe a public health emergency of international concern would have been justified,” said Dr. Jeremy Farrar, director of Wellcome, one of Britain’s biggest donors and a funder of Ebola vaccine research. “The epidemic is in a frightening phase and shows no sign of stopping anytime soon,” he said in a statement.

Congo’s health minister, Dr. Oly Ilunga, told The Associated Press that WHO’s decision to not declare the outbreak a global emergency was a testament to the country’s response efforts, which he called “effective.”

In Uganda, authorities said the country now had just one suspected Ebola case, who had no contact with the infected family and remained in isolation. They did not give more details.

Ninety-eight contacts with infected people have been identified. The health minister on Friday asked Ugandans not to shake hands or otherwise touch each other “until we are Ebola-free.”

Alexandra Phelan, a global health expert at Georgetown University, said the legal criteria for declaring Ebola a global emergency have long been met, even before the virus reached Uganda.

“Given that we are still seeing daily numbers of cases in the double digits and we do not have adequate surveillance, this indicates the outbreak is a persistent regional risk,” she said.

Phelan said she was concerned WHO might have been swayed by political considerations.

As the far deadlier 2014-16 Ebola outbreak raged in West Africa, WHO was heavily criticized for not declaring a global emergency until nearly 1,000 people had died and the virus had spread to at least three countries. Internal WHO documents later showed the agency feared the declaration would have economic and social implications for Liberia, Guinea and Sierra Leone.

Dr. Axelle Ronsse, emergency coordinator for Medecins Sans Frontieres, was unsure whether a declaration would help. She said outbreak responders, including WHO, should reevaluate their strategies to contain the spiraling outbreak.

“It’s quite clear that it’s not under control,” she said. “Now may be the time to reset and see what should be changed at this point.”  /muf