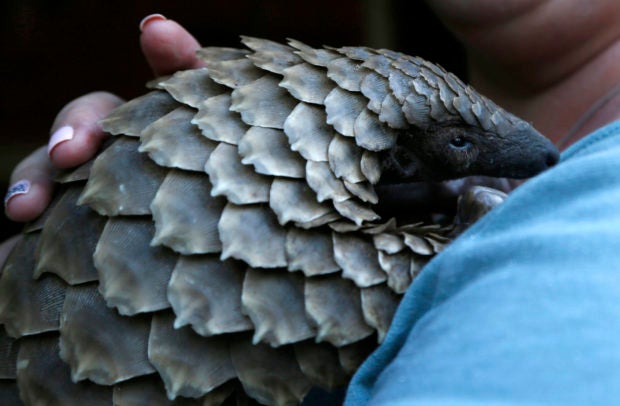 In this file photo taken on Friday March 16, 2018 a pangolin from the Johannesburg Wildlife Veterinary Hospital is taken to a nearby field to forage for food near Johannesburg. Nearly 100 countries took part in a globe-spanning crackdown on the illegal wildlife trade, seizing tons of meat, ivory, pangolin scales and timber in a monthlong bust that exposed the international reach of traffickers, Interpol said Wednesday, June 20, 2018. (AP Photo/Denis Farrell, File)

HANOI — Authorities have seized 7.5 tons of elephant ivory and pangolin scales in one of Vietnam’s biggest wildlife trafficking cases.

The 3.5 tons of ivory and 4 tons of pangolin scales were found Wednesday in barrels when customs officers checked a shipping container arriving at northern Hai Phong port, the Vietnam News Agency reported.

The steel barrels containing the ivory and scales were mixed with ones containing tar to conceal the trafficked animal parts from customs authorities.

The freight was addressed to a logistic company in Hai Phong city, but the news website said no one had claimed ownership of the shipment. No details were available on its origin.

Poaching and trading of ivory tusks and pangolins carry penalties of up to 5 years in jail in Vietnam. However, the Southeast Asian country is also a common destination for trafficked wildlife parts and a transit point for ivory and other trafficked materials to China.

The pangolin is said to be the most widely trafficked mammal in the world. Its scales are made of keratin and are ground up to use in traditional medicines. /kga

Read Next
Marijuana plants worth P2.9M burned in Kalinga
EDITORS' PICK
What to watch out for when selecting a video surveillance solution
DOH says COVID-19 cases plateauing, but public shouldn’t be ‘complacent’
House energy committee chair Arroyo bats for cheap electricity
Unleash the photographer in you this World Photography Day with vivo smartphones
23,000 cops to be deployed nationwide for school reopening
Look Through: The fate of impounded stray dogs
MOST READ
Sharon Cuneta asks for prayers for friend in ICU who suffered silent stroke
Light therapy could be the answer to your sleep problems
Korina Sanchez reunites with former ABS-CBN co-anchors Julius Babao, Cheryl Cosim
Solons file resolutions seeking probe on ABS-CBN, TV5 merger
Don't miss out on the latest news and information.