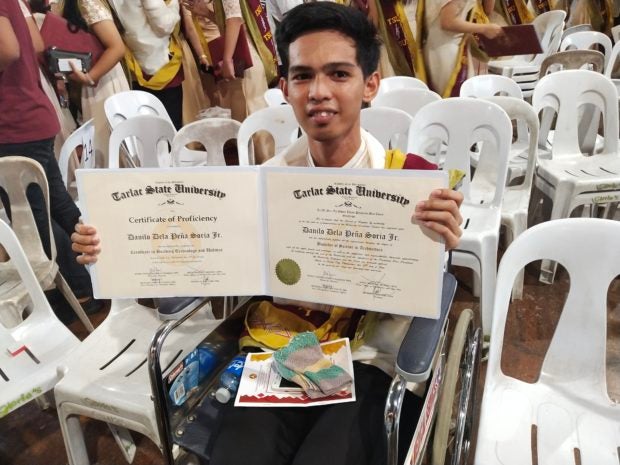 TARLAC CITY –– Rolling up in a wheelchair, 24-year-old Danilo Soria Jr., who suffers from muscular dystrophy, received his diploma for Bachelor of Science in Architecture course at the Tarlac State University on Friday (June 14).

Before the ceremony, Soria’s classmates searched for the wheelchair after the ailing young man admitted to them he may collapse on stage.

The eldest of four children, Soria had been struggling with his disability since his second year in high school when he was first diagnosed.

Muscular dystrophy is characterized by a progressive weakening of the muscles and the loss of muscle mass, which is attributed to a defective gene that stops manufacturing the proteins which form healthy muscles.

Soria, who grew up in the Aurora town of Dipaculao, was hospitalized in 2015 and stopped school for a year. 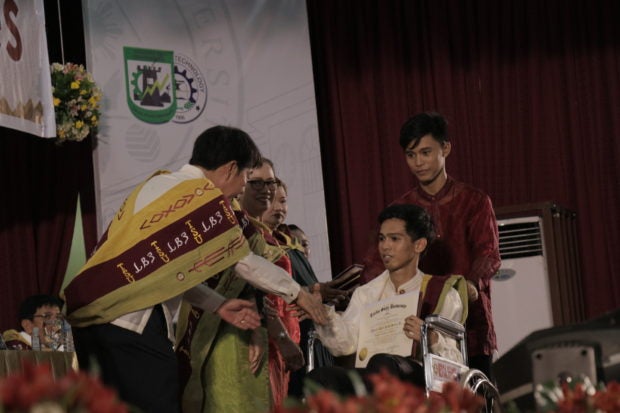 Danilo Soria Jr., 24, who suffers from muscular dystrophy, received his diploma for architecture during the 30th commencement exercises on Friday (June 14) at the Tarlac State University. Photos courtesy of Alexrael Caculitan

“When I was released from the hospital, my father [Danilo Sr.] asked me if I was strong enough to return to school. I replied, ‘yes,’ even though I was not yet feeling well. I just wanted to complete my education,” he said.

Soria enrolled at TSU and stayed with relatives. He goes to school very early each day because it takes a longer time to walk all the way to his classrooms.