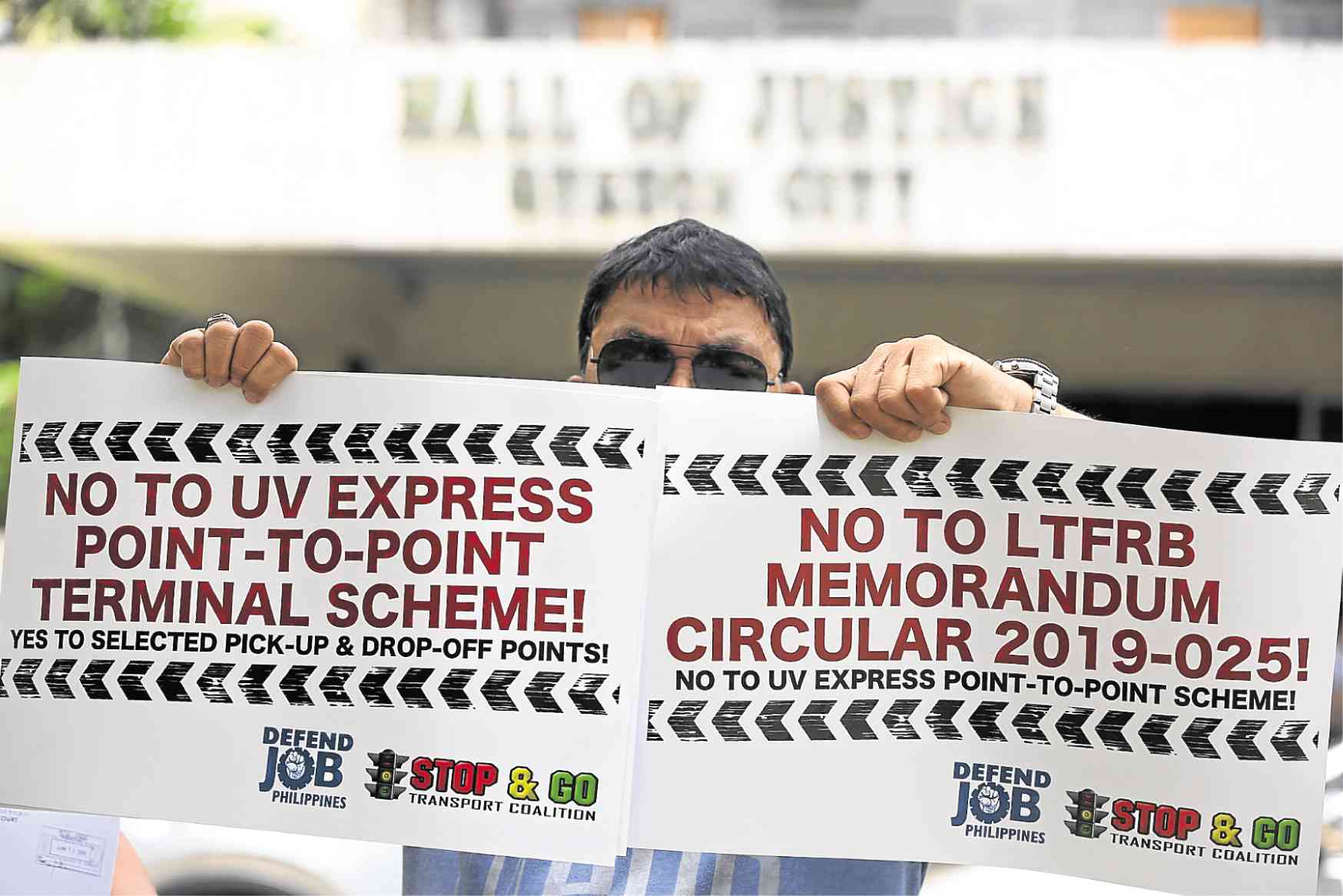 LEGAL RECOURSE Members of Stop and Go Transport Coalition and Defend Job Philippines have turned to the Quezon City Regional Trial Court in their campaign to prevent the Land Transportation Franchising and Regulatory Board from removing a provision allowing them to load and unload passengers outside their terminals. —NIÑO JESUS ORBETA

Transport and labor groups on Thursday asked the Quezon City Regional Trial Court to stop the implementation of a “despotic, unjust” policy that would require UV Express vans to operate strictly on a terminal-to-terminal basis.

In a 10-page petition, labor group Defend Job Philippines and Stop and Go Transport Coalition, whose members are UV Express drivers and operators, asked the court to issue a temporary restraining order (TRO) and writ of preliminary mandatory injunction against Memorandum Circular No. 2019-25 issued on May 16 by the Land Transportation Franchising and Regulatory Board (LTFRB).

The memorandum abolished a provision in MC 2009-19 which allowed UV Express vans to load and unload passengers within a 2-kilometer radius of their designated endpoints.

Calling the new memorandum “oppressive and authoritarian,” the petitioners argued that the LTFRB did not hold a public consultation before abolishing the 2-km radius policy.

The transport board earlier admitted that it did not see the need for a public hearing as it was merely upholding the original terms and conditions set in the franchise of UV Express vans.

But the petitioners argued that “MC No. 2019-25 [was] only based on conjectures, illicit presumptions and personal biases. MC 2009-19 was a result of a thorough public consultation. The rationale for the issuance of the 2019 MC [was] not based on actual and existing conditions.”

According to them, the LTFRB’s observation that UV Express vans do not follow regulations “should not have been [the] basis for the issuance of a circular that abolishes another circular.”

“The LTFRB grossly overlooked the drastic effect of the circular [on] commuters who have been used to a decade of convenience being provided by the UV Express service,” they said.

Under the new memorandum, passengers would now have to take a second ride  to get to their destinations after alighting from their terminals, they added.

Ariel Inton of Lawyers for Commuters’ Safety and Protection, who provided legal assistance for the filing of the petition for a TRO, said that his clients were pushing for the designation of selected stops in between their terminals “to ease the burden of commuters.”

He also urged the LTFRB to pattern the UV Express not after point-to-point (P2P),  but premium buses.

“That way, you are not compromising the premium nature of the UV Express, but you are still serving the need of the passengers,” Inton said.

Echoing his statement, Christian Lloyd Magsoy of Defend Job Philippines said the government needed to adapt to the changing times.

“Passengers now use UV Express vans to quicken and shorten their travel. It’s why the LTFRB needs to review its policy and to consult with its stakeholders,” Magsoy added.

The petition was filed just days before the expected effectivity of the new memorandum anytime next week.

Originally intended to take effect in the last week of May, the policy was put on hold for two weeks upon the urging of members of the House committee on Metro Manila development.