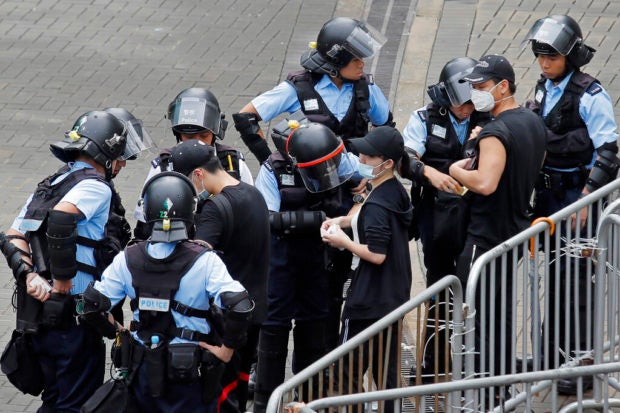 Riot police check the bags of protesters outside the Legislative Council in Hong Kong on June 13, 2019. AP

The protesters stood for hours Thursday on a downtown pedestrian bridge, singing “Sing Hallelujah to the Lord,” and holding signs that read, “No violence against HK people” and “Stop shooting.”

Most appeared to be students. Some but not all were wearing face masks, perhaps to obscure their identities after authorities warned protesters might be risking trouble over their activities.

Elsewhere, a few dozen people gathered outside the US Consulate, shouting to protest criticism from some US officials over police actions against the protesters.

Hong Kong’s police commissioner defended the use of tear gas and rubber bullets in the confrontations Wednesday outside the city’s government headquarters, saying officers had sought to avoid conflict. /ee