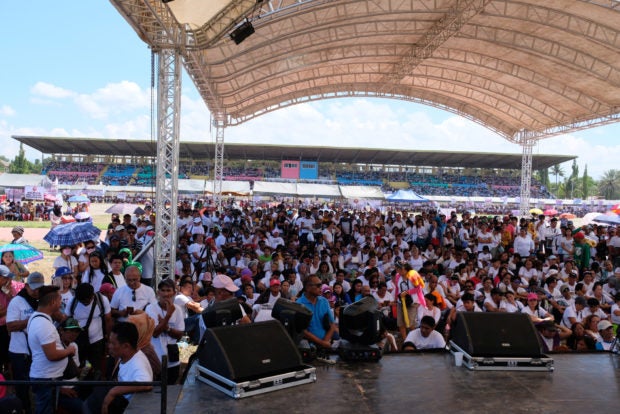 Kapa followers gather at the Acharon Sports Complex in General Santos City on Thursday to urge the President to lift his closure order on Kapa. BONG S. SARMIENTO

GENERAL SANTOS CITY — Kapa Community Ministry International, Inc. founder Joel Apolinario told a huge crowd of his followers here he would soon be meeting with President Duterte, amid anxiety voiced out by his followers over the government’s move to shut down their offices.

About 500,000 Kapa members gathered here Thursday for a prayer-rally to urge the President to reconsider his order shutting down what he dubbed as an investment scam.

Organizers said the crowd was still expected to peak late afternoon Thursday when the heat begins to wane.

Around 11:30 a.m., Apolinario told his followers at the Acharon Sports Complex here that President  Duterte would be meeting him in Davao City.

The President was set to arrive here on Thursday afternoon to award certificates of land ownership at the Lagao gymnasium.

Rene Catubigan, a Kapa lecturer, told the Inquirer that the meeting could have been facilitated through senator-elect Christopher Lawrence “Bong” Go, the president’s long-time aide.

Apolinario and Go had friends in common that could have arranged the meeting with the President, Catubigan said.

During the elections, Apolinario endorsed the senatorial bid of Go and Ronald “Bato” dela Rosa, another trusted aide of the President, according to Catubigan.

In a phone patch, Apolinario urged Kapa members to continue appealing to Mr. Duterte to withdraw the order he earlier issued to concerned government agencies to shut down the organization that claims to have over five million members inside and outside the country.

“We have done no violation, everything we’re doing is under the constitution,” said the Bible-quoting Apolinario who added the group “can overcome its predicament.”

Mr. Duterte, in a recent interview with Pastor Apollo Quiboloy, ordered the closure of Kapa Ministry over allegations that the group was involved in a pyramiding scam and violated securities laws.