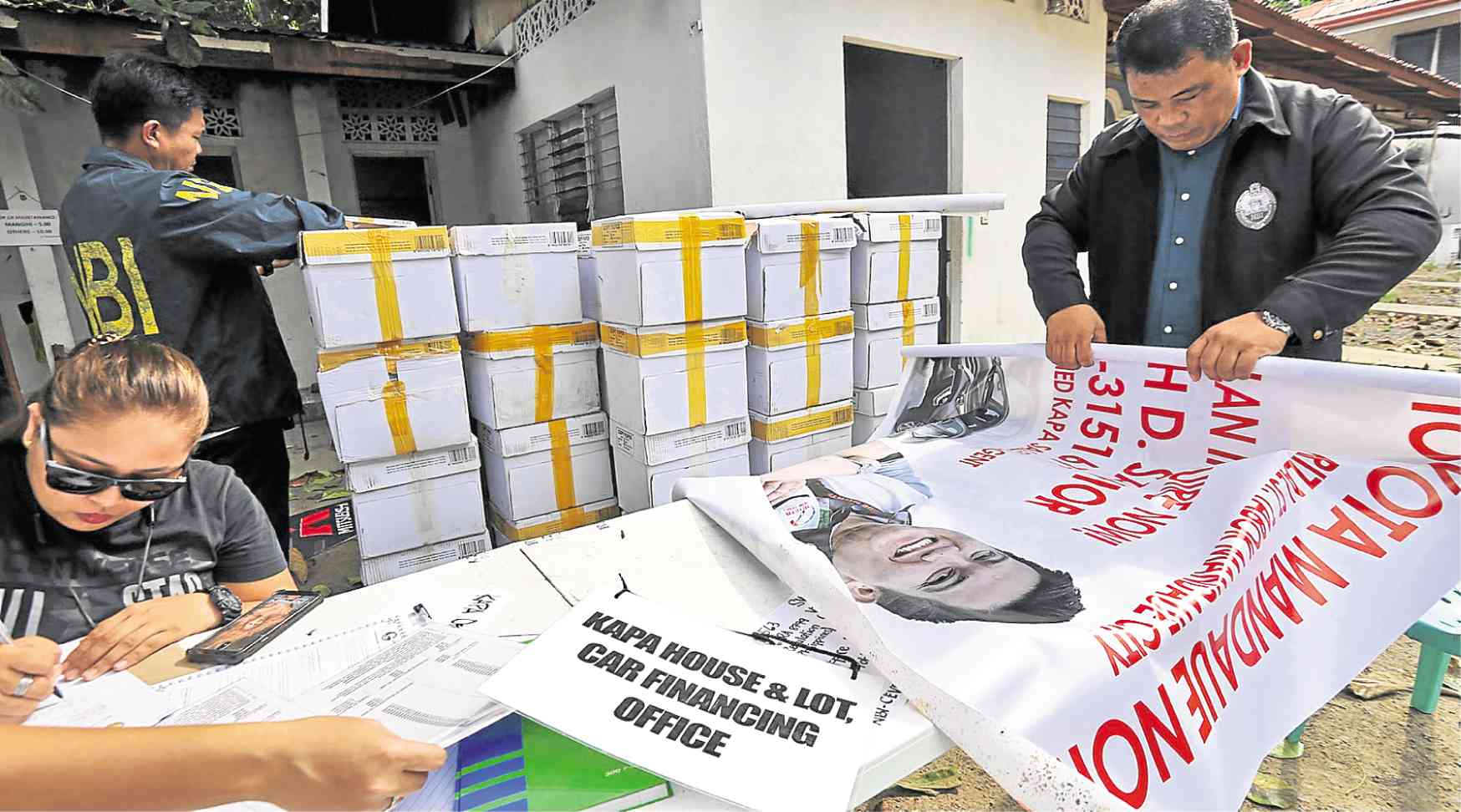 INVENTORY In Cebu province, agents of the National Bureau of Investigation and personnel of the Central Visayas police prepare an inventory of documents, computers and other items found in the office of Kapa International Community Ministry in Compostela town. On June 8, two days before the government raid, the group’s office was burned by unidentified suspects. —JUNJIE MENDOZA

DIGOS CITY, Davao del Sur, Philippines — When Luciana Rabi, 58, heard about the group called “Kabus Padatoon” (Kapa), or the Cebuano word for “the poor made rich,” she challenged herself to find a way to join, hoping it will change her life.

“It was true they would return 30 percent (of what I invested) because I was still able to get the money last month,” said Rabi, who runs a sari-sari (neighborhood variety) store in Bansalan town, Davao del Sur province.

But after President Rodrigo Duterte ordered the closure of Kapa Community Ministry International Inc. for operating without permits from the Securities and Exchange Commission (SEC), Rabi said she was no longer sure if she could still get her money back.

Kapa founder and pastor, Joel Apolinario, earlier said that Kapa was not collecting investments from members but “donations.” The Inquirer learned that Kapa members receive monthly returns of 30 percent of their “donations,” which they called “love gift.”

In Matanao town, also in Davao del Sur, Rosita Alejo, 62, said she was also attracted to what Kapa supposedly signified.

She said unlike other religious organizations, Kapa offers more than spiritual comfort to poor people like her. The ministry, she said, gives her a chance to grow her money.

As a senior citizen, Alejo has been getting a P500 financial aid from the government each month but the amount is not enough to sustain her needs.

“That’s why I borrowed P10,000 from the bombay (Indian moneylenders) just to invest in Kapa,” she said. “Now that Kapa has been shut down, I don’t know how to pay my debt.”

Loan sharks charged her a 20-percent interest for her P10,000 loan.

On Monday, the National Bureau of Investigation raided the house of Apolinario in General Santos City through a search warrant issued by a court in Manila. 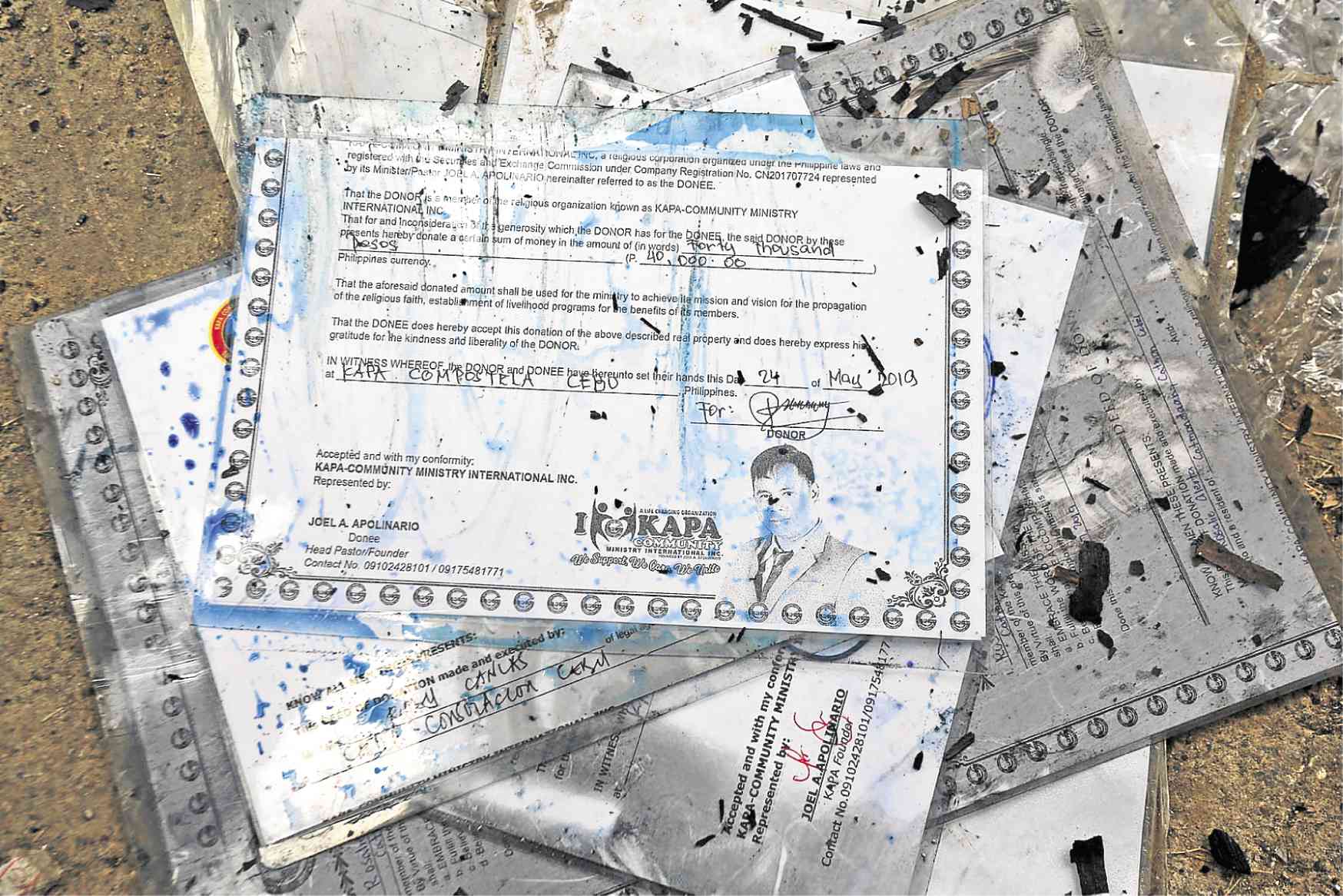 DONATION Among the documents found in Kapa’s office in Compostela, Cebu, are copies of certificates of donation issued to members. —JUNJIE MENDOZA

On the same day, the NBI also raided the offices of other groups in different areas in Mindanao offering similar high-yield returns as Kapa’s.

“I don’t know what will happen to us now after the government showed no mercy to the poor,” Rabi said, tears running down her cheeks.

Kapa members started massing up in General Santos City on Wednesday for a prayer rally that would coincide with the visit of President Duterte on Thursday.

Lawyer Arnel Zapatos, General Santos city administrator, confirmed that Kapa was granted a permit to hold prayer rallies on Wednesday and Thursday at Charon Sports Complex in Barangay Calumpang and on Friday at Oval Plaza in the city center.

Zapatos said the President was expected to visit General Santos on Thursday to distribute certificates of land ownership award at Lagao gymnasium.

Apolinario did not attend Wednesday’s gathering but he was expected to lead Thursday’s prayer rally, said Mario Basilio, a community paper publisher and a Kapa member.

“We are expecting a huge crowd to show to President Duterte that Kapa is helping improve the lives of its members,” Basilio said in a phone interview.

He said they were advised to consolidate their forces for the prayer rally in time for the President’s visit.

Basilio said Kapa members were disgusted by the government’s effort to shut down the group’s operation, “as it will deprive poor people the chance to improve their lives.”

In a radio interview on Tuesday, Riolen Gellisania, Kapa legal counsel, said the ministry would continue its operations, noting that the NBI raid was illegal.