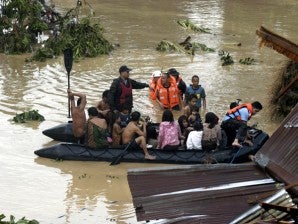 Police rescue trapped residents following a flashflood that inundated Cagayan de Oro city, Saturday, Dec. 17, 2011. Tropical storm “Sendong” (international codename: Washi) triggered flashfloods in the southern Philippines, killing scores of people and missing more. Mayor Lawrence Cruz of nearby Iligan said the coast guard and other rescuers were scouring the waters off his coastal city for survivors or bodies that may have been swept to the sea by a swollen river. AP

MANILA, Philippines—In the dead of night Sendong (international codename: Washi) tore through swaths of Mindanao not usually in the path of storms, flooding houses up to the rooftops and drowning scores of the sleeping populace in the most destructive calamity to hit the South in years.

“Complacency” among residents of Iligan and Cagayan de Oro cities unfamiliar with such levels of rainfall was blamed for the death toll, reaching 184 as of late Saturday afternoon by the Inquirer’s count, as most stayed in their houses despite warnings and rivers swelled to dangerous heights.

An entire village at the mouth of two rivers in Iligan was believed swallowed by raging waters that spilled from Lanao del Sur. Some 200 villagers of Barangay Bayug were missing and officials expressed fears they had been swept out to sea.

Dozens of others living in riverside settlements in Iligan, which is bisected by two river systems, were missing, as search-and-rescue troops sifted through the mud and debris.

In Cagayan de Oro, rescuers brought a hundred or so bodies to a basketball court. Logs slammed a major bridge, destroying it. Many houses were submerged up to the rooftops by rampaging flood waters. Power was shut down in city.

“This is an extraordinary situation,” Office of Civil Defense administrator Benito T. Ramos said in a briefing at Camp Aguinaldo.

“In my 60 years, this is the first time such a strong storm hit those places,” he said.

The usual path of storms coming from the Pacific, Ramos said, was to go either to the northeastern sections, such as typhoon-hardened Bicol and Cagayan Valley, or a little southward to Cebu or Leyte.

Almost never were weather disturbances known to move westward, almost in a horizontal fashion, going to the direction of Palawan, he said.

As a result, Ramos said, many residents dismissed the Storm Signal No. 2 warnings issued “three days in advance” by the weather bureau and the local disaster agencies.

At an inter-agency conference presided over by President Benigno Aquino, newly appointed Armed Forces of the Philippines Chief of Staff Lieutenant General Jessie Dellosa said the death toll had reached at least 133, with 93 bodies recovered in Cagayan de Oro and 40-50 in Iligan.

But Ramos said the official figure of the National Disaster Risk Reduction Management Council (NDRRMC), of which he is also executive director, was 56, of which 48 had been identified.

”The disparity is because we cannot count bodies that have not been identified,”  he said.

Robert Quinto, Pagasa senior weather specialist, said rainfall in Cagayan de Oro peaked at 181 mm over a 24 hour-period. Ramos said typical rainfall in the city would only go up to 15-20 mm per hour.

“This reminds me of [Tropical Storm] Ondoy,” Ramos said, referring to the severest storm that hit eastern Metro Manila and adjacent Rizal province in 2009 that left more than 400 dead and dumped more than 600 mm of rains.

He noted that there had not been as strong a storm as Ondoy in Marikina City in 40 years, similar to what happened in Iligan and Cagayan de Oro.

Sendong made landfall at about 4 p.m. Friday, and rain poured steadily throughout the day. Flood waters from Bukidnon spilled over to Cagayan de Oro while those from Lanao del Sur flowed to Iligan, Ramos said.

Ramos said many factors led to the tragic outcome, not least of which was the complacency of the residents who did not anticipate the severity of the storm, as well as the man-made destruction of natural forest covers.

Mining, logging and farming activities in the area were to blame, he said, as denuded forests left scant protection against the flow of flood waters.

”Pineapples planted in the fields, instead of trees,” cannot provide cover, he said.

Ramos said another anomaly was the timing of Sendong.

“In December we don’t usually see storms like this,” he said. Every year, 20 storms visit the Philippines.

Ramos attributed the changing weather patterns to global warming, adding that there might be a need to revisit the storm warning system in order to account for the phenomenon.