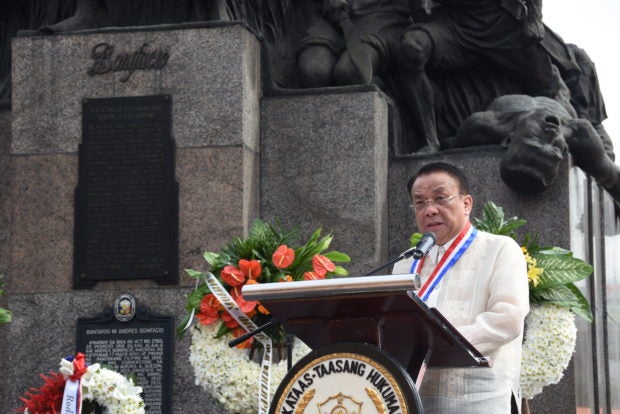 Chief Justice Lucas Bersamin takes a swipe at country’s dependence on foreigners during his Independence Speech at the Bonifacio Monument in Caloocan City. Photo by SC PIO

MANILA, Philippines – Chief Justice Lucas Bersamin on Wednesday reminded Filipinos not to forget the blood and sacrifices of our ancestors who fought for the country’s freedom from the tyrannical rule of foreign conquerors.

But later in his speech during the 121st Independence Day rites at the Andres Bonifacio Shrine in Caloocan City, Bersamin made a stinging remark against the country’s habit to rely too much on foreign assistance.

[Let us always put in mind that we won our independence because of the blood and sacrifices of our ancestors. Let us not disregard their sacrifices.]

The Chief Justice said the country should not rely on foreigners in addressing the country’s needs.

“Huwag natin ugaliing umasa sa mga dayuhan sa paglutas sa ating mga hamon at pagsubok,” Bersamin said, adding that only the country and its people can work for its development.

[We should not make it a habit to rely too much on foreigners to resolve our problems and challenges.]

He added that some nations offering assistance to the country were doing so out of their own vested interest.

[We welcome those who wanted to help as long as there is no condition. If China, America want to help, they can but no condition.]

The Chief Justice was asked if he was referring to the Duterte administration’s close ties with China as well as its inaction on China’s aggressive activities in the West Philippine Sea. However, he declined to comment, saying there is a pending related case on the matter before the high court.

Fisherfolk from Palawan went to the Supreme Court asking that it compel the government to protect the country’s waters. An oral argument is set on June 25. (Editor: Abe Cerojano)