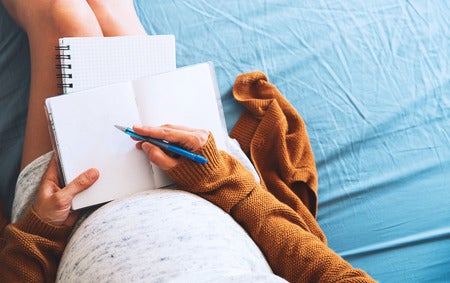 A student in Ethiopia took her exams after giving birth to a baby boy.  INQUIRER.net Stock Photo

A woman from Ethiopia took exams on her hospital bed shortly after she delivered her baby boy on Monday, June 10.

Almaz Derese, a 21-year-old secondary school student, went into labor shortly before her first exam. She was quickly back in fighting form and in half an hour, was determined to take her exams in English, Amharic and math, BBC reported on Tuesday, June 11.

She intended to take the exams before giving birth, but the exam schedule was postponed due to Ramadan.

It was her husband, Tadese Tulu, who convinced the school to give her the exams in the hospital. She will take the rest of her tests at the exam center.

Almaz did not want to delay her graduation day, and studied while she was pregnant. She said going into labor came easy to her because she was pressured to take her exams.

After finishing secondary school, Almaz aims to do a two-year course before going to university.

Barriers to education such as poverty remain for women in Ethiopia. According to nonprofit The Borgen Project, for every 100 boys in secondary school, there are only 77 girls, while women constitute 27% of the university population. Niña V. Guno /ra

Mom misses her graduation to attend son’s, receives degree during his ceremony

ADVERTISEMENT
Read Next
Alligator bit off piece of patrol car in Louisiana
EDITORS' PICK
Smart releases Hyun Bin’s second TVC
Current dominant strain of COVID-19 more infectious than original—study
Water remains our saving grace right now
DOLE: Return of OFWs’ remains from Saudi to be ‘delayed,’ deadline moved to ‘early next week’
‘Justice will be done,’ Duterte assures as he vowed probe on Jolo incident to bare ‘truth’
EuroMillions Superdraw: A lottery draw unlike any other is coming to the Philippines
MOST READ
Duterte tells military: No other president looked at you the way I did
BREAKING: Duterte signs anti-terror bill into law
Locsin warns of ‘severest response’ if China’s army drills in SCS ‘spill over’ to PH domain
Vico: Cleanup of bidding process saved Pasig gov’t P415M
Don't miss out on the latest news and information.