Mom misses her graduation to attend son’s, receives degree during his ceremony 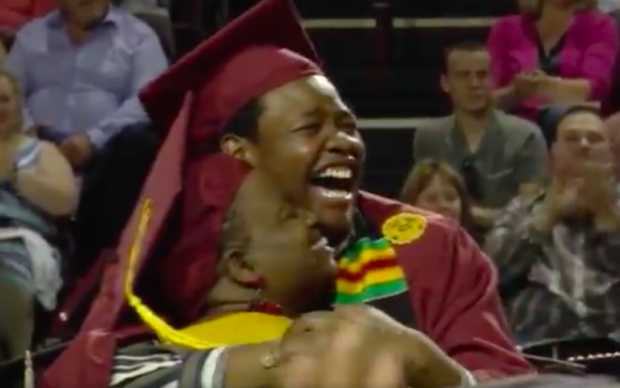 The graduates of Central Michigan University (MCU) in the US witnessed a heartwarming moment as a mom received her degree at her son’s commencement exercises after missing her own graduation to attend that of her son.

Sharonda Wilson decided to skip her graduation at Ferris State University (FSU) in Michigan to watch her son Stephan Wilson receive his bachelor’s degree last Saturday, May 4. The moment when she received her degree was captured in a now-viral video uploaded on MCU’s Twitter page. As of this writing, the tweet has 23,000 likes and almost 6,000 retweets.

To attend her son Stephan’s commencement ceremony, Sharonda Wilson was unable to attend her own from Ferris State University. Learning this, @cmichprez contacted FSU President Eisler and was able to confer her degree on behalf of FSU's president and trustees. #cmichgraduation pic.twitter.com/anCSTHDCdC

In the video, the Wilsons were beaming as CMU president Bob Davis presented Sharonda Wilson’s bachelor’s degree on behalf of FSU president David Eisler. When the mother moved her cap’s tassel to her left, the crowd erupted into applause and gave her a standing ovation.

“Dr. Davies really shocked me. I told a friend of mine that [my] mom was skipping her graduation to be with me, and she used her magic to help Dr. Davies orchestrate that moment,” Stephan Wilson said as per Detroit Free Press.

Wilson, who received his bachelor’s degree in music theater, also said that he was “speechless” when he found his mom was receiving her degree with him.

“My mother is truly the strongest and most compassionate woman I know. That moment tops [any] other moment I have ever shared with my mother.”  Casey Eridio /ra

LOOK: Boy from Ilocos Norte gets wish of goat as graduation gift