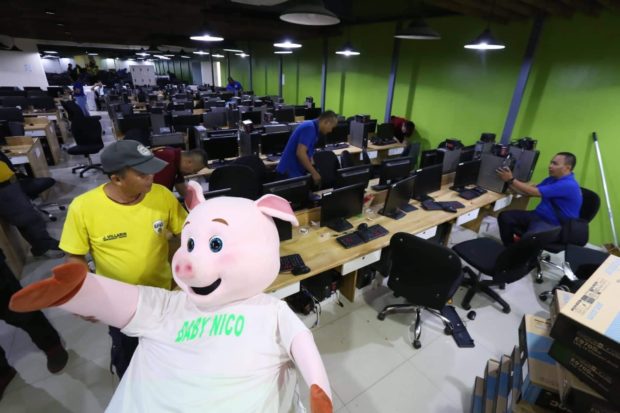 CEBU CITY — The Criminal Investigation and Detection Group in Central Visayas (CIDG-7) and the  Anti Cybercrime Group (ACG) Visayas raided the offices of two companies allegedly engaged  in pyramiding scheme in Cebu ordered stopped by the Securities and Exchange Commission.

With a search warrant, the operatives first swooped down  the main office of Organico Agribusiness Ventures Corp. in Barangay Mabolo, Cebu City past 9 a.m. on Tuesday.

The CIDG-7 confiscated documents  and computers from the Organico office but failed to find any personnel in the office.

Police Major Niño Briones, CIDG-Metro Cebu Chief, said it appeared that the Organico personnel knew that the office would be raided, especially after President Duterte ordered a crackdown on firms engaged in pyramiding scheme.

“Nakita naman na nagkalat na yung mga dokumento at binakante na yung iba. Posibleng dali-daling kinuha (The documents were scattered all over the place and some tables were empty. It is possible they left  the place in a hurry),” said Briones.

After the raid in Organico, the police went to Ada Farm Agriventures in MC Briones Highway, Mandaue City to implement another warrant.

Briones said they were  still conducting another investigation against four other companies in Cebu that were into pyramiding scheme.

Organico is said to be owned by a Cerrone Posas from Ormoc City.

With Ada Farm, which is owned by Adrian Dominic Ang,  investors would buy one chick for P500. In return, the investor would get P1,800 for every chick bought after two months.

“Based on the conduct of preliminary investigation, it was found that Organico is into selling of unregistered securities. They offered investment contract through social media,” said Bautista.

He added that Organico was registered as a corporation but  did not have a secondary permit to offer or solicit investments from the public.

The SEC received information regarding the activities of the  company last 2018 and had issued a public warning, that Organico was not allowed to solicit investments.

Bautista said it was confirmed in the investigation that Organico was involved in a scam.

“It can be called a scam. They are in the guise of selling piglets but that was just their front because based on the information that we received, they only had about 50 pigs but they had numerous investors,” Bautista said. (Editor: Leti Boniol)