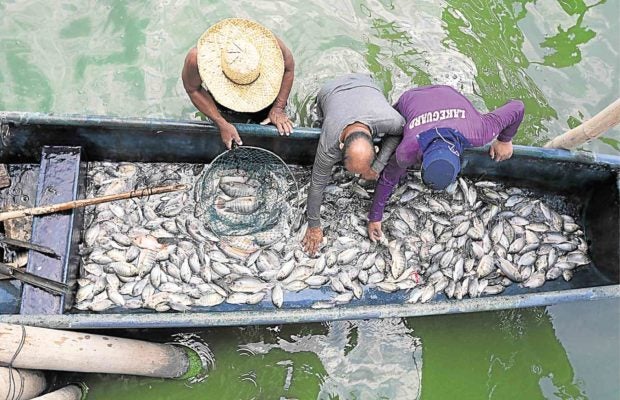 GREEN CATCH The algal bloom in Laguna de Bay may have affected water production but not the harvesting of “tilapia” from the lake. —GRIG C. MONTEGRANDE

MANILA, Philippines — Water consumers in Metro Manila and nearby provinces will continue to feel the supply crunch as dam levels drop further due to the El Niño phenomenon, on top of the algal bloom affecting Laguna de Bay and needed repairs in the distribution system.

Maynilad customers will experience pockets of service interruptions while those covered by Manila Water should expect rotational supply disruptions ranging from low pressure to no water.

In a statement, Manila Water said that its reservoir supplies were running low. As of 5 a.m. on Monday, the water level at Angat Dam was at 165.27 meters above sea level (masl) while it was 68.64 masl at the La Mesa Dam reservoir.

As of June 9, rotational service interruptions of four up to 21 hours were to be expected in areas under its coverage, including Quezon City, Makati, Mandaluyong, Manila, Marikina, Parañaque, Pasig, Pateros, San Juan, Taguig and parts of Rizal province.

Maynilad also announced in a statement that emergency interruptions would be implemented in some of its concession areas “until we are able to stabilize supply in our system.”

This was being done “[to] manage the quick drawdown of water from our reservoirs due to high water demand.”

Maintenance work will also be conducted on June 11-12 at its La Mesa Treatment Plant 1 in Quezon City to give way to the reinstallation of a component pulled out for repairs in April.

Read Next
Mangoes sell like hotcakes at DA fruit event
EDITORS' PICK
Cherry Mobile teams up with Cloud Panda PH, launches online store
WHO resumes hydroxychloroquine coronavirus trials
COOCAA TV Bounce Back Sale offers up to 50% off
DOLE eyeing P20-B subsidy for MSMEs
Over P785M distributed to 98K PUV drivers in Metro Manila — DSWD
SMDC The Good Guys on the Go
MOST READ
Philippines’ youngest survivor of COVID-19 dies
It’s final: Anti-Terror Bill now only needs Duterte’s signature
Piolo gets first call slip from ABS-CBN to resume ‘ASAP’ taping
‘She had no right to be in Singapore’: Youth pleads guilty to abusing Filipino maid
Don't miss out on the latest news and information.