A 5-year-old boy from Wisconsin, United States danced with his grandfather in a grocery store before a scheduled operation on his brain.

Kyu San Juan invited his grandfather Txhiaj Sawm Muas, to join him for dancing at around 11:57 p.m., as per a Facebook post by his mother Rasami Moua, on June 4.

The boy’s request came prior to his surgery the next morning for cerebral arteriovenous malformation, a tangle of abnormal blood vessels connecting arteries and veins in the brain. 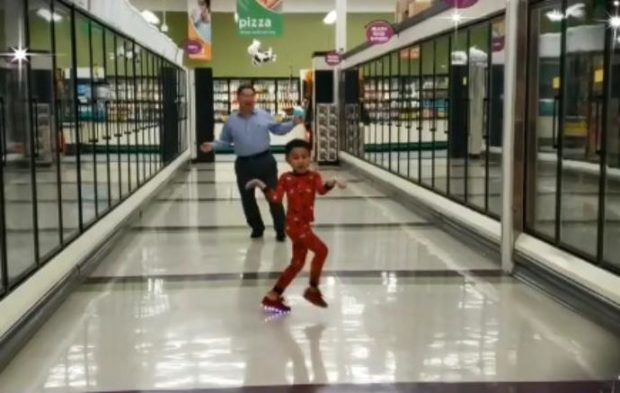 After his grandfather changed clothes, the family drove to a grocery store named Festival Foods. Upon arriving, the grandfather asked if they were going to buy something. Kyu replied, “No grandpa, we dance here in the groceries store.”

Despite his grandfather’s confusion, Kyu told him to “use his imagination” and that he can “dance anywhere.”

“Thanks dad for being such a good sport for Kyu and giving him all of your time before his surgery tomorrow. It was pretty fun!” the boy’s mother said.

Kyu danced in a red jumpsuit and red shoes while his grandfather, who was expecting a different venue for the dance, was wearing a blue long-sleeved button-down paired with dark gray slacks.

11:57 PMKyu: Grandpa, let's go dancing!Grandpa Txhiaj Sawm: Now?Kyu: Yeah, it'll be fun!Grandpa: Okay.*Grandpa changed out of his PJ**Kyu stayed in his PJ**DRIVES TO LOCATION**Pulls up to Festival Foods*Grandpa: Do you guys need to buy something?Kyu: No grandpa, we dance here in the groceries store.Grandpa: Here? People are going to think we're crazy!Kyu: People? What people? Grandpa: I thought we were going to a party or a club. *ME laughing hysterically*Kyu: Grandpa, Use your imagination. You can dance anywhere! 🤣 Thanks dad for being such a good sport for Kyu and giving him all of your time before his surgery tomorrow. It was pretty fun!

The operation was successful and Kyu was discharged from the Children’s Hospital of Wisconsin last Friday, June 7, as per his mother’s update on the same day.

We are so pleased to announce that Kyu was discharged this evening (Friday, June 7th). He's recovering so well, taking his walks through the halls with his nurse like a champion being so full of energy that the doctors don't see why he can't go home to finish recovering in the comfort of his own bed. Kyu's nurse came in and took out his IV in preparation for his departure, but before leaving, Kyu hopped on a tricycle, rode it all around the 7th floor unit saying bye and thank you to all the nurses and staff on the unit for helping him during his stay. Kyu got dressed then danced his way out the hospital door (not without saying how sad he is to leave because he'll miss all of the doctors and nurses). Amen! A huge Thank You to Children's Hospital of Wisconsin, Dr. Sean Lew, Dr. Raphael Sacho, the Anesthesia Care Team, the Surgical Team, the Imagining & Radiology Team and all of the nurses for taking such great care of Kyu. You are the MVP team! This surgery was successful because of you! We love you and we appreciate your dedication to healing and helping the sick. Blessings to you all!Thank you to our family, friends, Kyu's Martial Arts School Total Self Defense, Kyu's ASL school Hand-N-Hand of Northeastern Wisconsin, Inc., Kyu's dance floor at Festival Foods, Festival Foods Turkey Trot Boomer and everyone near and far who lifted Kyu up in prayers, sent positive vibes and well wishes! We are so blessed to have you, an entire village and the community stand by and support us in such volume! We were moved to tears! Thank again! Thank you mom & dad (Txhiaj Sawm Muas Mao Moua) for flying all the way from Philadelphia, Pennsylvania to be with your grandson during this trying time. Thank you Phauj(s) thiab Yawg Laus Mai Lauj Youa Bee Vang Chong Lee for everything you have done for us the weekend before Kyu's surgery day. We are indebted to you! ❤And most importantly, Thank you God, pog koob, yawm koob, yawn saub, lub ntuj daim av for protecting and watching over our son. ❤Video: RasamiMusic: ThePianoGuys – A Million Dreams (Piano Cover)

The dance video has been viewed over 100,000 times, as of this writing. JB