As of Saturday evening, rescuers had recovered 256 bodies in Cagayan de Oro, Iligan City, the Zamboanga del Norte municipalities of Dapitan and Polanco, and Monkayo in Compostela Valley.

At least 22 deaths were reported in Negros Oriental.

More than 200 others remained missing in the affected areas, according to data provided by officials.

In Iligan City alone, 153 bodies had been taken to the city’s three funeral homes by late Saturday afternoon. Only 82 of them had been identified.

Many of the dead bodies were retrieved from as far as the beaches of Kauswagan in Lanao del Norte, Manticao in Misamis Oriental and Iligan Bay.

There were more than 10 survivors, who were plucked out of sea by rescuers, according to Alan Padilla, team leader of the rescue unit of Iligan City Disaster Risk Riduction Council.

In Cagayan de Oro, where the floodwaters rose to more than a meter in the wee hours of Saturday, 95 people were confirmed dead, said Col. Leopoldo Galon, spokesperson of the military’s Eastern Mindanao Command based in Davao City. 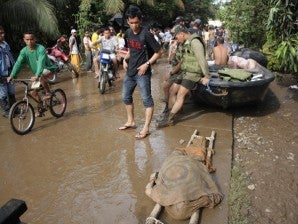 SENDONG’S TRAIL. An unidentified body lies by the roadside in Barangay (village) Tambo, Macasandig, Cagayan de Oro City. At least 20 others were recovered by rescuers as of 8:30 a.m. Saturday, Dec. 17, 2011 in the village alone. JB R. Deveza/INQUIRER Mindanao

He said soldiers from the 4th Infantry Division were helping in the retrieval of the dead.

Twenty of the drowning victims, many of them children, were recovered in Barangay Tambo alone, one of the villages dotting the banks of the swollen Cagayan de Oro River.

The Inquirer was there when some of the bodies were being retrieved Saturday.

In all, 23 barangays in Cagayan de Oro were flooded.

Senior Inspector Elmer Decena of the Northern Mindanao Regional Public Safety Battalion said they had to use rubber boats in rescuing residents starting at 2 a.m., when the floods were at their severest.

Decena said among the dead they managed to immediately retrieve was the family of a Caucasian surnamed Frierson.

In Iligan City, 81 dead bodies were retrieved in the beaches of Kauswagan in Lanao del Norte, Manticao in Misamis Oriental and Iligan Bay. There were more than 10 survivors, who were plucked out of the sea by rescuers, according to Alan Padilla, team leader of the rescue unit of the Iligan City Disaster Risk Reduction Council.

In Monkayo, Compostela Valley, five people were confirmed killed in a series of landslides that hit the gold-rich area of Mt. Diwata, according to Joan Pintal, municipal information officer.

The dead included a 57-year-old woman and three children aged 4 to 14 and a 28-year old miner, she said.

Rosita dela Peña and her wards identified as Ashlia Tuan, 14; her siblings Nasser, 6, and Rakema, 4, and miner Julito Lumactod were killed in the landslide that hit the Nang district past 4 p.m. Friday, Pintal told the Inquirer by phone.

Six other landslides hit other parts of the gold-rich village between 4 and 5 p.m., burying several houses and affecting some 90 families, according to Pintal.

In the lowland village of Baylo, 15 houses were destroyed and seven people were injured as the Baylo River overflowed, swamping the community, she said.

The local government of Monkayo immediately dispatched assistance to the victims while local rescuers and the Army’s 25th Infantry Battalion helped in the rescue operations.

Raña said 50 other people remained missing but Galon said, based on their latest data, 135 others were missing in Cagayan de Oro alone.

Armin Cuenca, head of the Oro Alert, said people were warned about the risk of flashfloods, especially in areas near rivers, but many refused to leave their homes.

Among those who failed to leave their home as the floodwaters swept the city was the Cabillo family.

Bryan Cabillo of Tambo said his wife and three children were carried away by the rushing floodwaters that swept their home late Friday. He said he tried to save them but his efforts were in vain as he, too, had to struggle with the strong currents.

Galon said the military was helping in the search-and-rescue efforts and had flown choppers to locate missing or trapped victims.

Cagayan de Oro was at the center of the typhoon, which could explain why it suffered the most, officials said.

According to the Philippine Atmospheric, Geophysical and Astronomical Services Administration 180 millimeters of rain fell into the city Friday until dawn Saturday.

By noon Saturday the rains had stopped in many places in Mindanao although drizzles were still being reported in the northern and eastern parts of the island late Saturday.

The Claveria-Calanasan road in Misamis Oriental was closed to traffic due to landslides, the NDRRMC reported.

In nearby Iligan City, among those killed was broadcaster Enie Alzonado of Radyo Mo Nationwide, according to Mayor Lawrence Cruz.

Cruz said the Iligan death toll could still increase as more than 200 people were missing as of late Saturday afternoon.

The floods were worse than anything in the past, Cruz said, noting that place that were never flooded before went under water during Sendon’s passage. in many areas the water was more than a meter deep, he said.

“In the flood-prone districts, houses were either under water or washed away. Many families had to be rescued from the roofs of their houses,” Cruz said.

By noon the waters had subsided this could speed up the search-and-rescue efforts, he said.

At least 24 villages of Iligan were flooded, according to an NDRRMC report.

Lt. Col. Randolph Cabangbang, spokesperson of the Western Mindanao Command based in Zamboanga City, said soldiers were deployed to help in the search-and-rescue operations in various places in Mindanao.

Cabangbang said early Saturday that in Iligan City alone, many residents were still on the roofs of their houses when soldiers arrived for a rescue mission.

The total number of people displaced by the floods was still being ascertained.

But in Cagayan de Oro, which still had no electricity and no potable water as of Saturday afternoon, some 20,000 people were being assisted in at least 10 evacuation centers, according to Social Welfare Secretary Dinky Soliman.

In Iligan City, Cruz said, “thousands had been displaced” but the actual number was still being determined.

The Iligan Bloggers Society had started a fund drive for the flood victims. The group said it preferred canned goods and packed foods and clothing but donors could also send cash.

Details of the fund drive may be found on the group’s blog page http://t.co/9JEEYwGT.

In Zamboanga del Norte, Gov. Rolando Yebes said three persons died in the floods that swamped some villages in Dapitan and Polanco on Thursday as Sendong’s fury began to be felt.

Yebes said the floods were also worsened by the high high tide.

“Disaster personnel continue to monitor and assess the situation to determine actual number of families affected,” he said.

The NDRRMC said the number of affected persons in Zamboanga del Norte was 1,307.

Maj. Rosa Manuel, civil military officer of the Eastern Mindanao command based in Davao City, said the extent of damage from the floods and landslides was not immediately known.

Flashfloods were also reported in Compostela and Nabunturan towns.

In the Caraga region, 1,560 persons were affected by floods that swept a number of villages in Lingig, Surigao del Sur and Bislig City.

Sea vessels servicing the region were also advised against sailing, according to the NDRMMC report.

Floods also swept through the villages of Cabanghan and Cabugao in Panitan town, also in Capiz.