Artist inspires through paintings despite battle with meningitis

ARTIST AT WORK Even at the hospital where he is confined due to severe diarrhea, meningitis-afflicted Mark Bernardo Agcaoili (above) paints using his foot. His collection of paintings and portraits include a smiling boy (left) and Jesus Christ (below). —VILLAMOR VISAYA JR./PHOTO FILES OF MARK BERNARDO AGCAOILI 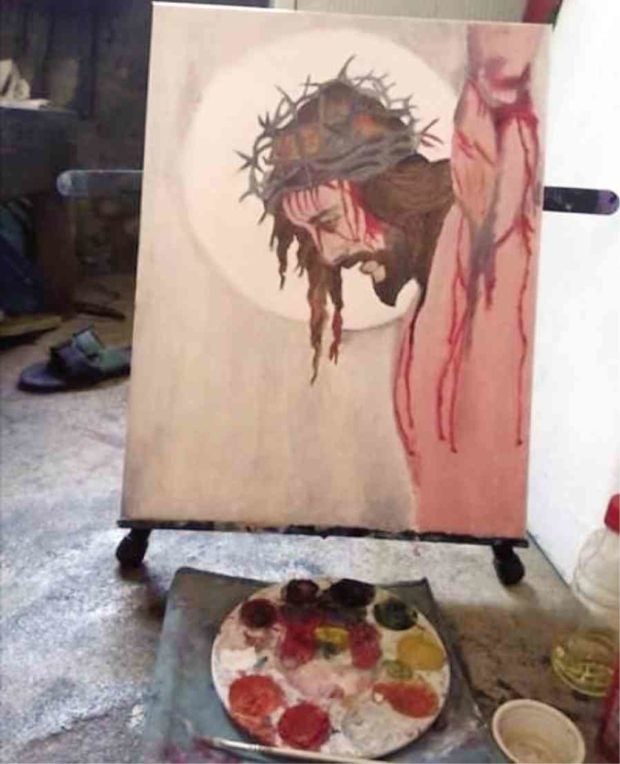 CITY OF ILAGAN, Isabela, Philippines — A 29-year-old visual artist battling meningitis has earned praises for proving that his ailment is not a hindrance to survival.

He already has a collection of paintings and portraits featuring movie and television personalities and local officials.

Since he has a speech problem, Mark also uses his foot to send text and post messages on social media.

“Not because you encountered a lot of problems, you will just give up. Come to think of it, even those who sleep on the streets carry a huge burden but they continue to survive,” Mark said in a Facebook post in a mix of English and Filipino.

He added: “Problem is a blessing. If you can’t solve it today, then tomorrow. But if it is still not solved yet, there is still another tomorrow. To the person reading this. Don’t give up. Stay strong!”

During his first year in high school, he started suffering from seizures and severe headache, prompting his parents to take him to the hospital.

He frequented the hospital and his condition worsened.

“We did not foresee that he would suffer the illness. It all started with a severe headache and he eventually could not use his arms and fingers and his neck became permanently stiff. I was devastated as he was an honor student but I could do nothing,” said his mother, Teresita.

Mark’s parents decided to keep him at home while fighting meningitis.

Teresita said Mark wanted to continue his schooling and she planned to enroll him at the Special Education Center in Ilagan East School.

“But we have one problem. We have to look for a guardian to assist him while I work to support our family,” said Teresita, who is employed at city hall.

Mark has also found another way to express his thoughts and emotions with the help of his mother.

Teresita said her son would whisper to her and murmur words to relay what he thought and felt.

To Mark, art is one way to console those who have afflictions.

“Prayer is the best solution for everything, isn’t it, Sir?” he told the Inquirer in a Facebook chat on Saturday.

Mark said he had never stopped encouraging himself despite being bullied in the past.

When he was still not sickly, Mark joined the Isabela Artists Society. He and his fellow students were taught by professional artists to improve their skills.

Since he can vividly create artworks, Mark has been getting recognition from villagers and local leaders who commission him to do portraits.

Mark has acknowledged his blessings and felt ecstatic with the accolades he has been getting from people who support him.

His painting of Jesus Christ amused his friend Lester John Servilla, who described the piece as a “great work” and told him that he had improved a lot.

City Councilor Jay Eveson Diaz, whose portrait Mark did using coffee granules, said he was fond of calling Mark an “idol” for his mastery of his craft.

His fan, Vernon Ligad, described his ability as an “awesome talent.”

“Another Ilagan pride, keep it up,” Ligad told Mark.

Monina Molleague, another admirer, told Mark: “You’re an inspiration. May God bless you.”