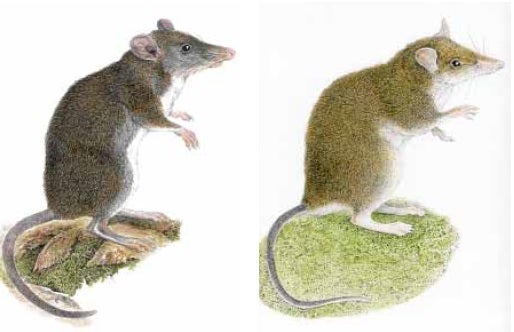 LONG POINTED NOSES The “tweezer-beaked hopping rats” (Rhynchomys labo and Rhynchomys mingan) as illustrated by Velizar Simeonovski of the Field Museum of Chicago.

MANILA, Philippines — For the two newly discovered species of rodents in the mountains of Luzon, peanut butter isn’t all the craze.

Give them earthworms instead, and they’ll slurp them up like spaghetti.

A team of Filipino and American scientists discovered the new species of “shrew-rats” in Camarines Sur and Aurora provinces, highlighting anew the richness of the country’s biodiversity amid threats to the habitats of many species yet to be known.

In a paper recently published in the Journal of Mammalogy, the distinctive rodents, often called “tweezer-beaked hopping rats,” were named Rhynchomys labo and Rhynchomys mingan.

The species’ names were from the areas they were found: Mount Labo in Camarines Sur and Mount Mingan in Aurora, respectively.

Since the 1980s, mammology surveys had been using standard baits that were irresistible to most rodents: a combination of peanut butter and slices of fried coconut, said lead author Eric Rickart, a curator of the Natural History Museum of Utah at the University of Utah.

The potent combination, he said, could really “[make] your mouth water”—but not for certain critters.

Even when a particular rodent stumbled into a live trap, it didn’t touch the peanut butter bait, researchers said.

But when the team offered an earthworm, the rat “slurped it up like a kid eating spaghetti,” said Rickart in the museum’s news release.

The discovery then led the team to find more species of those that preferred worms, including R. labo and R. mingan.

The authors described the new species as almost like “little kangaroos,” hopping around on sturdy hind legs and large hind feet.

They also have long, delicate snouts and almost no teeth.

“They make little runways through the forest and patrol these little trails, day and night, looking for earthworms.”

Heaney leads the yearly mammal survey in the country, according to the Museum of Natural History at the University of the Philippines in Los Baños (UPLB). His team includes the late Danilo Balete of the Field Museum and UPLB professor Philip Alviola, two Filipino scientists who are also the paper’s coauthors.

Previously, only four Rhynchomys species were known to science.

Researchers said the discovery, however, calls for better protection of the country’s remaining forests, as the new rodents are seen as examples of the “generally poorly known, but incredible biodiversity” in the Philippines.

A paper published by Filipino and American authors in the scientific journal “Frontiers of Biogeography” in 2016 has shown that Luzon island has “the greatest concentration of unique mammals” in the world.

The 15-year study found that in 2000, only 28 species of nonflying mammal species were known in Luzon, the largest island in the Philippines.

By the time the project ended, this number had doubled to 56 species, of which 52 are found nowhere else.

The authors said Luzon “has never been connected to any continental land,” allowing the few species that arrived from the Asian mainland to evolve and diversify.

“Just about every time we’ve gone to a new area of Luzon with mountains, we’ve discovered that there are unique species,” Rickart said.

This biodiversity hot spot, however, remains heavily under threat of degradation, due to overhunting, logging and weak enforcement of environmental laws.

“All areas of highland habitat, particularly those supporting endemic species, require protection from direct overexploitation of forest resources and indirect threats posed by geothermal development and mining activities,” the researchers said in their paper.