FUKUOKA, Japan – Trade and economy ministers of the Group of 20 major economies met Sunday in Japan to discuss ways to reorder trade rules and finances in an era of technological change and protectionism.

The meetings of financial leaders in the southern city of Fukuoka and of economic ministers in Tsukuba, near Tokyo, are aiming to forge a consensus on a range of issues to be endorsed by leaders who will meet in late June in Osaka. 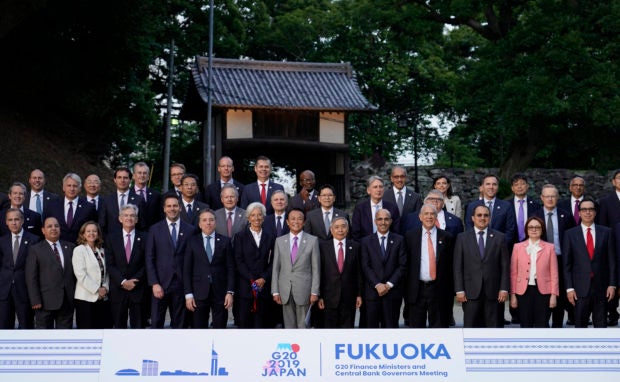 The central bank governors and other financial regulators meeting in Fukuoka flagged risks from upsets to the global economy as Beijing and Washington clash over trade and technology.

U.S. Treasury Secretary Steven Mnuchin said in a tweet that he had met with his Japanese counterpart, Finance Minister Taro Aso, and discussed “the ongoing close cooperation between the U.S. and Japan across a number of economic and security issues.”

Japan, the world’s third-largest economy, is hosting the G-20 for the first time since it was founded in 1999. The venue for the annual financial meeting, Fukuoka, is a thriving regional hub and base for startups.

Both Aso and Japan’s central bank governor, Haruhiko Kuroda, kept their comments on concerns over the trade clash between the U.S. and China mild.

“With prospects for the resumption of China-U.S. talks unclear, there’s a risk that if this is not resolved trust in world markets will be damaged,” Aso said Saturday.

Mnuchin acknowledged concern among fellow leaders over slowing world growth, though he said it was not due to the standoff with Beijing over trade and technology.

He and other members of President Donald Trump’s administration contend that the ripple effects of the billions of dollars in tariffs imposed by Washington on Chinese exports over the past year are creating new business opportunities for other businesses in the U.S. and other countries.

But Mnuchin, who has co-led Washington’s side in the stalled trade talks with U.S. Trade Representative Robert Lighthizer, said, “I’m hearing concerns if we continue on this path there could be issues. There will be winners and losers.”

As is typical of pre-summit gatherings, the G-20 officials were haggling over the wording of a communique to be issued as meetings wrap up Sunday.

The communique will be incorporated into proposals to be endorsed by the top leaders in Osaka.

That June 28-29 meeting is likely to overshadowed by a planned meeting between Trump and Chinese President Xi Jinping.

Mnuchin said that while he was discussing trade issues with China’s central bank governor at the talks in Fukuoka, he did not expect talks, stalled now for over a month, to resume before then./gg