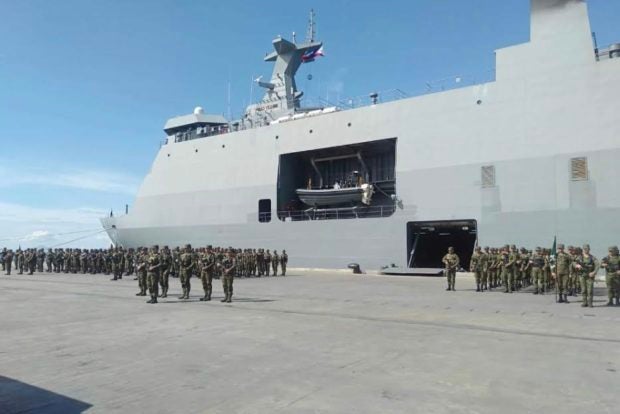 It’s homecoming for more than 400 soldiers of the Army’s 11th Infantry Battalion as they assemble before boarding the BRP Tarlac 601 that would take them back to Negros Occidental. JULIE ALIPALA

ZAMBOANGA CITY—Soldiers sent as reinforcements against the threat of terrorism in the city on Saturday (June 8) returned to Negros Occidental declaring their mission accomplished.

Col. Rolando Gomez, head of the 11th Infantry Battalion which was originally based in Negros, said the sendoff for at least 400 of the battalion’s soldiers was the happiest he had seen because “they are going back to their mother unit and closer to their families.”

Gomez said his troops had helped keep the city safe. “Our strategic mission was to make the city kidnapping and bombing-free,” he said. “For almost three years, we were able to accomplish our mission.”

He said, however, that some of the soldiers felt sad at leaving behind women they had met and married in Zamboanga.

“Those single men we had in the battalion married Zamboanga women,” Gomez said.

He said his men were returning to Negros as better soldiers after getting exposed to a diverse culture in the city.

The soldiers, Gomez said, were returning “with better perspective and appreciation of diverse culture.” Nearly all of the soldiers were Catholics who had come face-to-face with some Muslims in Zamboanga.

Some of the people that the soldiers were leaving behind also expressed sadness.

Raymond Amil, teacher at the Bihing Tahik Elementary School for Badjao children in the city, said he and his students “all feel sad.”

“This is the only Army unit that stayed with us and worked with us to build this school,” he said.

Amil recalled that when he and his students sought help through social media for the repair of their dilapidated school, the IIth IB soldiers were the first to respond “inspiring our Badjao kids to continue their education.’

The 11th IB would be replaced by soldiers from the 74th IB based in Lamitan City in Basilan province. Gomez was also reassigned to the 3rd Infantry Division in Capiz province.  (Editor:Tony Bergonia)