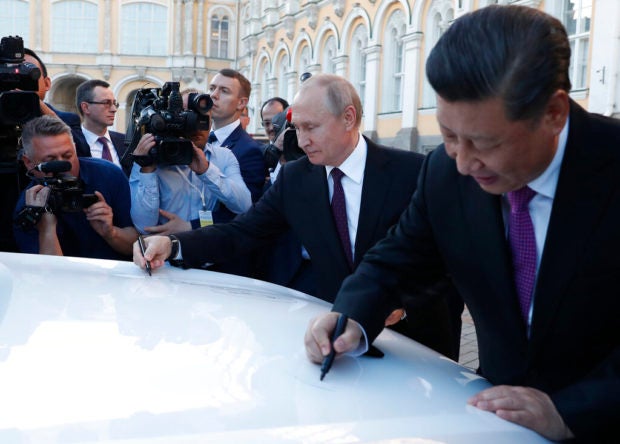 Russian President Vladimir Putin (second right) and Chinese President Xi Jinping (right) sign their names on a Havel F7 car during a presentation of the investment project on opening the Great Wall Motors’ new Haval car factory in Russia’s Tula Region in the Kremlin in Moscow, Russia, on June 5, 2019. AP

BEIJING — China’s Commerce Ministry will release a list of “unreliable” foreign companies in the near future, a spokesman said Thursday, without giving a specific date.

The decision to create the list, announced last week, is widely seen as a response to a US decision to put Huawei Technologies on a blacklist for alleged theft of intellectual property and evasion of Iran sanctions.

Chinese Commerce Ministry spokesman Gao Feng told reporters at a weekly briefing that the process of drawing up the list was underway. He said no particular company or industry is being targeted.

The US Department of Commerce has issued an order that U.S. companies will have to seek government approval for sales to Huawei once its own list takes effect after a 90-day grace period.

China hasn’t said what action it would take against the entities included on its list.

Gao said China does not want a trade war but is not afraid of one.

“If the US keeps escalating trade frictions,” he said, “China will follow to the end.”

Huawei, once a little-known supplier of telecoms network gear and now the industry leader, has become a national champion as Beijing fights back against US claims that the company poses a security risk and should be excluded from development of super-fast next-generation 5G networks.

Huawei has denied it might be forced to spy on behalf of China’s ruling Communist Party and demanded that the US and other governments produce evidence to back up their allegations.

Chinese President Xi Jinping highlighted the Chinese government’s strong support for the company, based in southern China’s Shenzhen, by presiding over a signing ceremony in Moscow on Wednesday of a deal between Huawei and Russian telecom company MTS.

The deal calls for MTS and Huawei to jointly develop 5G networks in Russia, MTS said in a statement.

Xi and Russian President Vladimir Putin also attended a launch ceremony for a Chinese car factory in Russia’s Tula region. The two leaders signed their names on a Great Wall Motors Haval F7 sedan and Putin hailed the venture as evidence of increasingly close business ties between the former rivals.

Huawei’s chairman, Guo Ping, noted that with 16,000 5G-related patents, the company leads in the technology.
In Beijing, the Commerce Ministry issued a report Thursday emphasizing that China and the U.S. have both benefited from their trade ties, despite China’s huge surpluses.

“The argument that the US suffered losses doesn’t hold ground,” it reads in part. “China is an important export market to the US, and US exports to China have created a great deal of employment for the US … There is not necessarily a connection between the trade deficit and the economy and employment.”

President Donald Trump has ordered tariffs of up to 25% on hundreds of billions of dollars’ worth of Chinese exports and his administration is preparing to extend them to $300 billion more — almost all items shipped to the U.S. from China. China has reciprocated with tariffs of its own, among other measures.

There has been no recent sign of progress on resolving the standoff between Beijing and Washington over U.S. demands that Beijing act to reduce the trade imbalance.

The Trump administration also wants Chinese leaders to give up their blueprint for making Chinese industries leaders in a wide range of advanced technologies, plans that US officials worry might erode American technological dominance. The U.S. and other governments and foreign companies also are unhappy over Chinese policies and business practices that they say force transfers of technology.

Gao, the Commerce Ministry spokesman, said US pressure tactics were responsible for the stalemate in the trade talks.

“The responsibility completely lies in the US side,” he said. “Whoever started the trouble should end it. How the trade talk will develop depends on the US. We will listen to what they say and watch what they do.” /ee