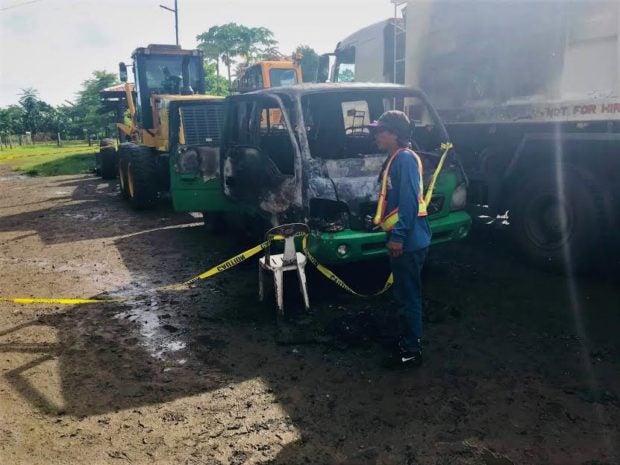 CAGAYAN DE ORO CITY –– An armed group believed to be members of the New People’s Army (NPA) stormed a construction firm and set fire on one of its vehicles in Barangay Cabangahan, Malaybalay City, Bukidnon, predawn Thursday, June 6.

He said the perpetrators held a company watchman at gunpoint before dousing the truck with gasoline and setting it on fire.

Abanales said the attackers did not meet resistance from the residents, although it was reported that construction company workers drove the rebels away before they could inflict more harm.

The report did not explain in detail how the workers resisted.

The suspected rebels immediately fled aboard motorcycles after lighting up the truck, Abanales added.

It was not immediately known how many rebels were involved in the attack.

The military has condemned the destruction of civilian properties by the NPA.

“The NPA has already done a series of atrocities toward innocent civilians not just in Bukidnon, but in other parts of the country as well,” said Brigadier General Edgardo De Leon, the Philippine Army’s 403rd Brigade commander.

In light of the NPA attacks on civilian properties, De Leon has called on human rights groups such as Karapatan to act on these abuses.

“We call on [Karapatan], which claims to be a citizens watch that monitors [international humanitarian law] violations, to do a parallel investigation to determine if the NPA indeed violated IHL in this particular incident or not,” the general said.

Major General Franco Nemesio Gacal, the Army’s 4th Infantry Division commander, said: “We are very thankful to the workers’ courageous act of shooing away the NPA terrorists to prevent their equipment from being destroyed and for the quick response of [Bureau of Fire Protection] responders.”

The military said the NPA could face charges in court if there was a strong case against them.

The Regional Trial Court Branch 25 based in Cagayan de Oro City has been designated as the special court that handles IHL-related cases.

The NPA has claimed responsibility for the series of incidents, including the recent strafing of village watchmen in Barangay Sto. Niño, Manolo Fortich, and for the detonation of anti-personnel mines in Impasugo-ong, Bukidnon, that hit a convoy of vehicles carrying foreign nationals who came to observe the tribal best practices in the area.

In the past, the NPA has been known to torch vehicles and equipment belonging to multinational corporations operating, mostly in Bukidnon. (Editor: Leti Boniol)