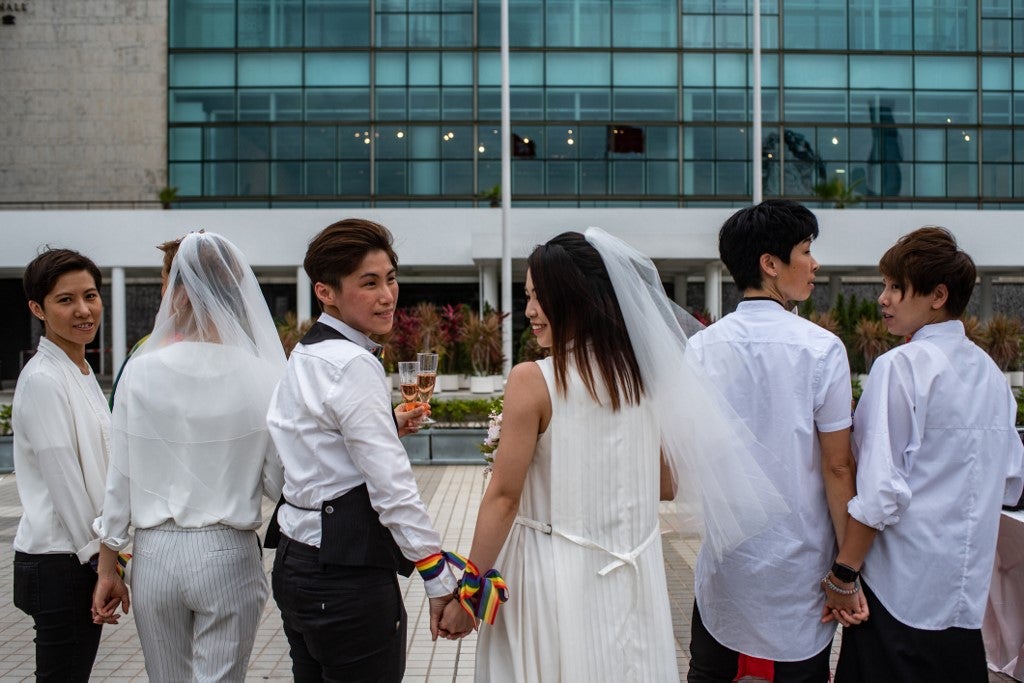 Same-sex couples attend an event to raise awareness of gay rights in Hong Kong on May 25, 2019, one day after Taiwan made history with Asia’s first legal gay weddings.  (Photo by Philip FONG / AFP)

HONG KONG — Hong Kong’s top court ordered the government to grant spousal rights and benefits to the husband of a gay civil servant who married overseas, in a new landmark ruling for LGBT rights on Thursday.

The judgement, handed down by the Court of Final Appeal, is the latest instance where the judiciary has found against the government and in favour of gay rights groups seeking greater equality.

Hong Kong does not recognise same-sex marriage or civil unions and only decriminalised homosexuality in 1991.

Despite growing public support for gay marriage, campaigners have made little headway against staunch opposition from the city’s successive pro-Beijing governments and religious conservatives.

But they have started to see some success in the courts.

The latest case was brought by Angus Leung, a Hong Kong immigration officer who legally married his husband in New Zealand in 2014.

When the newlyweds returned to Hong Kong, Leung applied for his husband to be granted the same medical and dental benefits available to his married heterosexual colleagues but was rebuffed. He was also unable to register for married couple tax benefits.

Government lawyers said granting spousal benefits would go against Hong Kong’s legal definition of marriage as being between a man and a wife.

But the judges dismissed that argument.

The judges also said the government’s reticence contravened the civil service’s own published commitment to being an equal opportunities employer.

Thursday’s ruling comes after a British lesbian won the right for her partner to be granted a spousal visa in Hong Kong last year.

Hong Kong’s lower courts are currently hearing a challenge from a Hong Kong woman who wants to enter into a civil partnership with her female partner.

And a separate case has been lodged by two Hong Kong men directly challenging the same-sex marriage ban as unconstitutional.

Hong Kong’s ban stands in contrast to nearby Taiwan where lawmakers made history last month by legalising same-sex marriage in a landmark first for Asia.