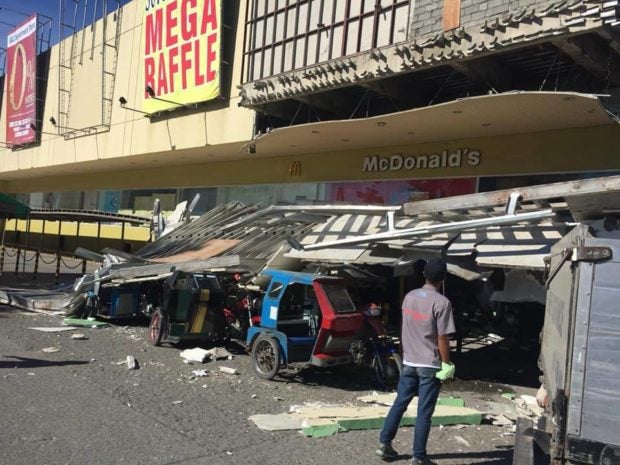 GENERAL SANTOS CITY –– An awning near the entrance of KCC Mall of GenSan along J. Catolico Street in this city collapsed on Thursday morning, barely two hours before the mall opened.

The mall management said nobody was hurt. The awning near a McDonald’s fast food outlet fell at 7:30 a.m. The mall opens at 9 a.m.

“It was lucky enough that it occurred not during mall hours. It happened about 7:30 a.m. so only a few people were around the vicinity,” Dacera said in a radio interview.

He added that the place where the structure landed is always filled with mall-goers all day long.

Within an hour, Dacera said, the fallen debris had been cleared and the mall opened as scheduled.

“Our operations are now normal, the entire mall is now serving our customers,” the KCC Mall of GenSan marketing office said in a statement.

Dacera said his office was determining whether the earthquake that hit Palimbang in Sultan Kudarat early on Thursday has something to do with the mall incident.

The magnitude 5.4 quake, which occurred at 4:41 a.m., was felt at Intensity 1 in General Santos City, according to the Philippine Institute of Volcanology and Seismology. (Editor: Leti Boniol)