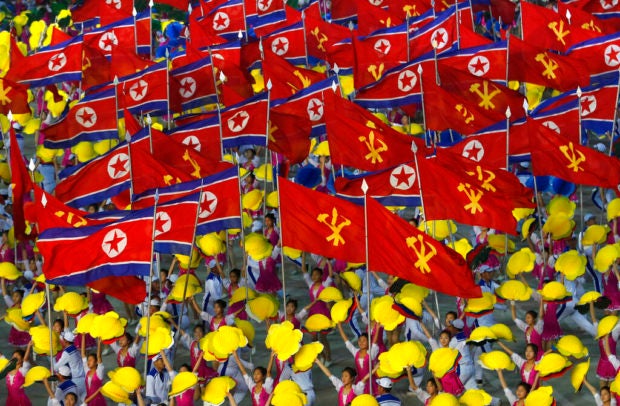 In this Oct. 25, 2018 ile photo, dancers wave flags of North Korea and Korean Workers’ Party as they perform during “The Glorious Country” mass games at May Day Stadium in Pyongyang, North Korea.  AP

Simon Cockerell, general manager of Beijing-based Koryo Tours, said it was informed by its North Korean partners that the show, titled “The Land of the People,” will be suspended for days or weeks starting next Monday while its creators make adjustments. Rowan Beard, a tour manager at Young Pioneer Tours, said his company heard the same information and that no dates were given for when the show would resume.

“We assume it will halt so some tweaks and improvements can be made to the performance,” Beard said in an email.

The North’s Rodong Sinmun newspaper published photos of Kim waving to clapping spectators while flanked by senior officials, including his powerful sister, Kim Yo Jong, and crowds in the stands using colored cards to spell out

“To the eternity of Korea, hurrah!” as fireworks exploded over the stadium.

State media often report scoldings by Kim of military officials, factory operators, educators and others perceived to be not performing to his standards. The mass games — propaganda spectacles that feature thousands of gymnasts, dancers and flip card-holding spectators moving in coordinated perfection — were once routine in North Korea. But the performances went on a hiatus for several years during the mourning for Kim’s father and only returned last year. /ee