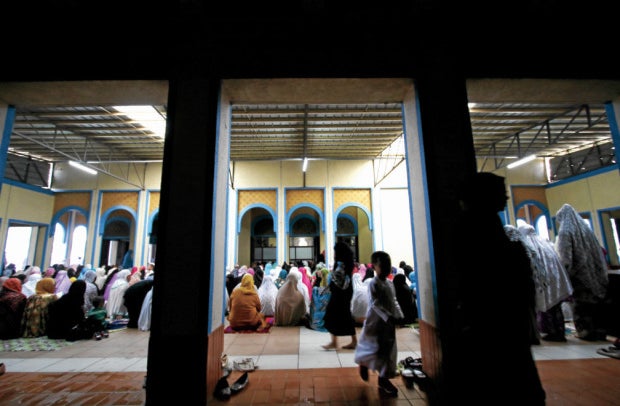 Muslim faithfuls gather to offer morning prayer for the celebration of Eid’l Fitr or the end of the Islamic holy month of fasting, Ramadan, at the Blue Mosque in Maharlika Village, Taguig City.INQUIRER FILE PHOTO

MANILA, Philippines — As the country observes Eid’l Fitr on Wednesday, marking the end of Ramadan, senators joined in wishing Muslim communities a joyous celebration, as well as praying for peace and justice for Mindanao and for the whole country.

Opposition Senator Leila de Lima said that as the country observes Eid’l Fit’r, Filipinos should collectively pray and call for peace in conflict-stricken areas such as Marawi City.

She noted how thousands of residents remain homeless and stuck in evacuation centers.

De Lima called on the government to prioritize the swift rehabilitation of Marawi and give opportunities to its Maranao residents.

“Let us continue to pray for lasting peace and justice to prevail in Mindanao and in our country,” De Lima added.

Meanwhile, outgoing Senator Loren Legarda said she hopes the observance of the holiday would “foster deeper understanding” among Filipinos regardless of faith or religious belief.

“As a feast of great importance to Muslims, the Eid’l Fitr has become a familiar occasion even to our Catholic-dominated nation,” Legarda said in a separate statement.

“We hope that beyond familiarity, the observance of this holiday would foster deeper understanding among Filipinos regardless of faith or religious belief,” she added.

For her part, Senator Grace Poe noted that the month-long fasting during the Ramadan is a reminder to the Filipino Muslims and other Filipinos of their obligation to “aid those who live in suffering and poverty.”

“The month of daily fasting is not only a sacred duty, but a powerful teaching to remind us of our shared obligation with all faiths to aid those who live in suffering and poverty,” Poe said in a statement.

“Let’s work together to build a more humane world,” she added.

Senator Aquilino “Koko” Pimentel III, meanwhile, said he prays that the values extolled in Ramadan, such as self-sacrifice, self-restraint, forgiveness, charity, and unity, will not be forgotten on the celebration of Eid’l Fitr.

“I pray that these teachings of Ramadan shall not be forgotten after today’s festivities, but rather, practiced in our daily life,” Pimentel said.

As the whole country celebrates Eid’l Fitr, Senator Francis Pangilinan urged Filipinos to “draw strength” from the teachings of Islam “to be brave and persevering amid the everyday challenges.”

“Together in faith and shared values, let us continue to pursue a more just and more progressive society, to make better the plight of our less fortunate brothers and sisters,” Pangilinan said. (Editor: Jonathan P. Vicente)