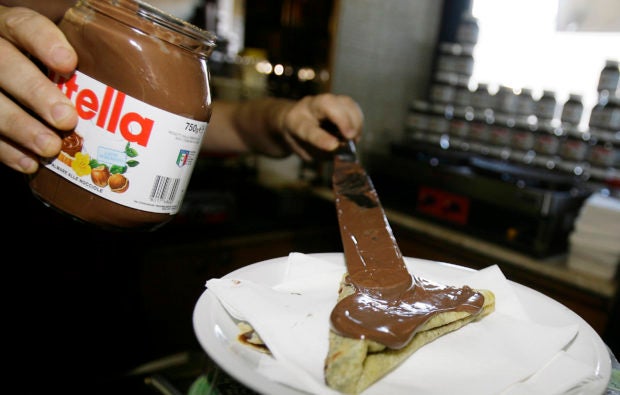 In this June 18 2010 file photo,a bartender spreads Nutella on a crepe in a creperie in Rome. French workers frustrated over salary negotiations are blocking the world’s biggest Nutella factory. Tensions are mounting at the site in Villers-Ecalles in Normandy, where activists from the Workers’ Force union have been blocking trucks from entering or leaving the factory for a week. (AP Photo/Alberto Pellaschiar, File)

PARIS — No more Nutella?! French workers are threatening as much, bringing the world’s biggest Nutella factory to a near-standstill in a showdown over salary negotiations.

Tensions have been mounting at the site in Villers-Ecalles in Normandy, where activists from the Workers’ Force union have been barring trucks from entering or leaving the factory for a week.

The plant produces a staggering 600,000 jars of the chocolate and hazelnut spread every day – a quarter of the world’s production of a product cherished by children and adults alike.

After six days of failed efforts to end the standoff, Nutella owner Ferrero on Monday started threatening fines for workers involved in the blockade, according to a company statement.

But that didn’t deter unions. Workers’ Force said 160 of the factory’s 350 workers are taking part in a walkout to demand 4.5% salary increases, one-time 900-euro bonuses and better working conditions.

He said the company agreed to a 1.7% raise for the lowest paid workers, and one-time bonuses between zero and 400 euros, which unions say isn’t enough given rising living costs. Unions also complain of deteriorating factory conditions and increasing pressure to be more productive.

Italian-owned Ferrero said it is trying to protect workers who aren’t on strike, and wants to resume dialogue – but not until the workers stop blocking the factory.

The next negotiation meeting is scheduled for June 13.

French workers frequently go on strike during salary negotiations and occasionally resort to more dramatic methods. The last strike to hit the Villers-Ecalles factory was in 2011.

The action comes amid anger among many low-income French workers at pro-business policies by President Emmanuel Macron seen as favoring the rich – and that prompted the yellow vest protest movement. /kga