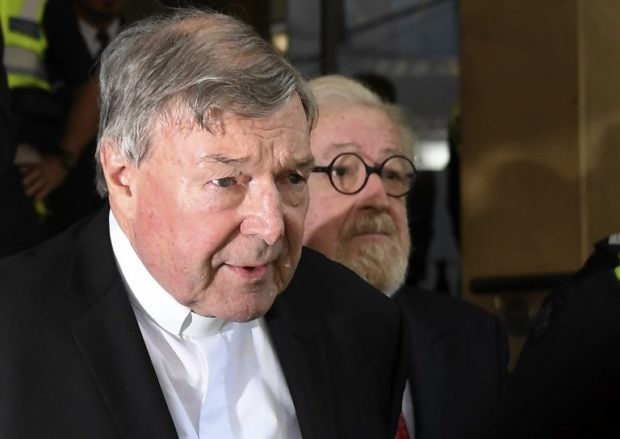 Vatican finance chief Cardinal George Pell leaves after making an appearance in court in Melbourne on May 1, 2018.
Pell pleaded not guilty on May 1 after being ordered to stand trial on multiple historical sexual offence charges in Australia. / AFP PHOTO / WILLIAM WEST

Melbourne, Australia — The Vatican’s former number-three, Cardinal George Pell, will begin on Wednesday his appeal against convictions for “brazen” sex attacks on two choirboys in the 1990s.

Pell, who managed church finances and helped elect two popes, argues the verdict was “unreasonable”, that jurors were not shown vital evidence, and that he was not asked to enter a plea in front of the panel.

The most senior figure in the Catholic Church to be convicted of historical child sexual offences, Pell was sentenced in March to six years in prison.

He was found guilty on five counts, including oral rape and molesting the two 13-year-olds in the sacristy of St. Paul’s Cathedral when he was the Archbishop of Melbourne.

One of his victims died of a drug overdose in 2014 and never disclosed the abuse.

A second set of charges against the 77-year-old – stemming from alleged abuse in a swimming pool in Ballarat, Victoria, in the 1970s – was dropped earlier this year.

Pell’s appeal at Melbourne’s Supreme Court – which will be live streamed to the public – has been greatly anticipated by his supporters and high-profile commentators who said he was made a scapegoat for the broader sins of the Catholic Church and did not receive a fair trial.

The case will be presided over by three judges – Chief Justice of the Supreme Court of Victoria Justice Anne Ferguson, President of the Court of Appeal Justice Chris Maxwell, and Justice Mark Weinberg.

The judges could determine Pell’s fate this week or could defer their decision until a later date. The verdict does not have to be unanimous but must have the support of two of the justices.

Pell is not required to appear at the appeal hearings on June 5 and 6, and it is unclear if he will show up or possibly appear via video link from jail.

His legal team for the appeal, headed by Bret Walker, will argue his case on three grounds.

The first and most significant is that the jury’s verdict was “unreasonable and cannot be supported having regard to the evidence”.

For Pell’s team, the jury could not be satisfied beyond a reasonable doubt on the word of a single complainant and that there was “unchallenged exculpatory evidence from more than 20 Crown witnesses”.

The second ground is that Kidd erred in not allowing defense lawyer Robert Richter to show the jury a video that purportedly shows Pell’s attack would have been impossible based on the movement of people in the church.

The third ground is that there was “a fundamental irregularity in the trial process” because Pell was not asked if he pleaded guilty or not guilty in front of the jury.

Walker, who declined to speak to the media about Pell’s case, has in the past represented tobacco companies in their fight against plain packaging laws.

Jeremy Gans, a criminal justice expert at the University of Melbourne, said “there is a good chance that Pell will succeed” in his appeal on the first ground – that the verdict reached was “unsafe and unsatisfactory”.

“It’s unusual to for such convictions to be based ‘solely’ on the account of the victim, with no other evidence of the accused’s guilt whatsoever,” he said.

“And it’s especially unusual for that to happen when there was a second victim [who] never spoke of any abuse and cannot testify.

“That doesn’t mean Pell is innocent or that the jury made a mistake. It just means that the appeal court is likely to find that the jury’s verdict is an unsafe verdict,” he explained.

A source close to Pell said he had always maintained his innocence and that he welcomed the live stream of his appeal as part of “a public transparent process.”

“The Cardinal is well and is grateful for the many letters and cards of support he has received from people around the country and overseas,” the source told AFP.

Leonie Sheedy, an abuse survivor and head of the Care Leavers Australasia Network, said Pell’s appeal hearing could have a psychological impact on victims of clerical abuse.

This is not Pell’s final recourse for appeal. Gans said whichever side loses will likely take the case to the High Court and that a final ruling on Pell’s guilt might not be made until next year.  /kga