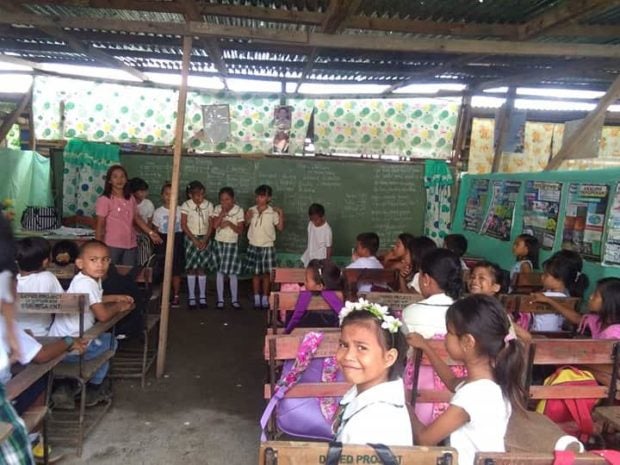 Students at the Guadalupe Heights Integrated School in Tacloban City stay inside makeshift classrooms as the construction of a four-storey building has yet to be completed. Lack of classrooms greeted students of this school at the opening of classes on Monday, June 3, 2019. Photo by Joey Gabieta

TACLOBAN CITY — Lack of classrooms greeted students of the Guadalupe Heights Integrated School in Barangay Suhi in this city during Monday’s opening of classes.

While construction of a four-storey building is ongoing, students of the school, both in elementary and secondary levels, are to contend with temporary school rooms made of light materials and  separated only either by a wall or curtain.

“That is why, I asked the contractor if they could hasten the construction of the four-storey building consisting of 16 classrooms,” school principal Larry Peñalosa said.

The school is one of the newly-established public schools in Tacloban where families whose houses were destroyed by super typhoon “Yolanda” in November 8, 2013 were resettled.

Based on the calendar of works, the new building is set to be completed by December of this year. Funded by the Department of Education (DepEd), the structure is said to be worth P41 million.

Peñalosa said that despite of the ongoing construction, they still need at least 16 new classrooms to accommodate their growing population coming from Guadalupe I, II, III, and IV with a combined population of over 10,000 people.

Genrix Oliva, a Grade 4 pupil, said he does not mind if their classrooms are just like shelter-type.

“This is just temporary, I guess. I just want to learn,” the student said.

At present, the school has about 700 enrolled elementary students and about 500 secondary students. All these students would be handled by a total of 27 teachers.

DepEd’s regional information officer Jasmin Calzita said that based on their monitoring, the opening of classes went on smoothly.

“We have not received any negative reports from any of our (school) divisions,” she said. (Editor: Katherine G. Adraneda)