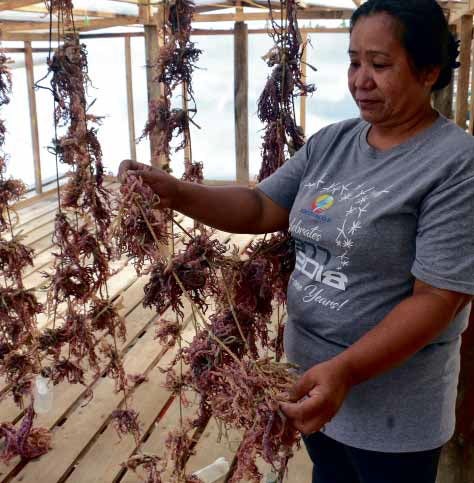 PUERTO PRINCESA CITY, Palawan, Philippines — With their husbands out fishing in the open sea, the women in the coastal town of Quezon in Palawan province also prepare for a full day ahead.

They congregate on the beach, take their slippers off, and keep their hands busy at the seaside structure that houses their prized crop: dried seaweed.

The women of Barangay Isugod, nearly 200 kilometers south of Puerto Princesa City, have risen to the challenge to lead an organization of fishermen in their community.

Calling themselves the Cherish Fisherfolks Association, the women are bonded by the resolve to stay afloat against the fierce tide of job insecurity and climate change.

For the past few years, seaweed farming has provided them a path out of hunger and poverty, especially for the women who now share the role as their families’ breadwinners.

“Unlike in cities where there are permanent jobs or factories to work in, we only have the sea,” said Mardy Montaño, the association president. “When a storm hits our community, our cooking pots are also hit hard. When their fathers don’t return with good catch, our children suffer.”

When not attending to their seaweed, the women occupy themselves with activities inside and beyond their homes. Besides raising children and supporting their families, they also arrange meetings, attend seminars or learn from trainings on how to be better farmers or entrepreneurs.

Seaweed was introduced to the coastal community facing the West Philippine Sea by the Bureau of Fisheries and Aquatic Resources in the late 1990s.

When its price doubled in the market due to higher demand in the early 2000s, fishermen who had relied mainly on their nets saw its potential as an alternative livelihood.

“Seaweed farms somewhat became the fishermen’s part-time job, which they tended to before heading out to fish,” Montaño said.

Today, while men still primarily dive into the waters to cultivate their seaweed farms, women have taken an active role in harvesting, drying and selling their crop, which is used both as food and as an ingredient in desserts, medicines and cosmetics.

A line of fresh seaweed can weigh as much as 100 kilos, but is reduced to 25 to 30 kilos when dried.

But dried seaweeds sell much higher than fresh ones, reaching up to P85 per kilo. One line can sell up to P2,500 each, providing extra income for a mother to send her children to school, buy a motorized boat for fishing, and even acquire a television and a satellite dish for her home.

While not as labor intensive as fishing, seaweed farmers are also at the mercy of the ocean and its temperaments. With rising temperatures and increasingly unpredictable weather, the changing climate also poses a threat to their community.

In the five years that she has been cultivating seaweed, Reginaliza Gimotea has seen how the hotter temperatures heavily affected their farms.

“The seaweed fare much better when the temperature is cooler and the waves are bigger,” she said. “When the warm weather lingers, our profit is scarce and debts become more frequent.”

Changes in ocean temperature, light intensity and salinity can cause seaweeds to suffer from ice-ice, a disease that induces whitening and hardening of its tissues and ultimately, adversely affects the farmers’ crop yield.

But even in warmer temperatures, work never stops for the farmers, who instead use the lean months to prepare cuttings for the next crop season from June to March.

Despite the challenges, seaweed farming remains a viable option for livelihood for households here in Quezon, which the women also consider as a bonding opportunity for their families. Husbands (and sometimes, the wives who can swim) go out to sea to cultivate and harvest, while the women and children take charge of drying and selling.

When the weather is favorable, particularly during the rainy months, each family can earn almost P15,000 every 45 days to three months.

Their work has also recently become lighter following the donation of two seaweed driers to the association by the development organization Lutheran World Relief—one by the seaside and another floating near the farms, which shortened the drying period from almost a week to two to three days.

“Our products now are much cleaner and have better quality,” Montaño said.

The benefits of seaweed farming in Quezon town have gone beyond providing profit, but also changed behaviors in the community, according to the USAID Protect Wildlife project, which provided technical support for the association.

As their farms became nurseries for lobsters, krills and anchovies and grazing areas for marine turtles and dugong, the fishermen here have actively participated in monitoring the seas against illegal, unregulated and unreported fishing.

At present, the association’s members have buyers in Quezon town, who then transport the dried seaweeds to a consolidator in Puerto Princesa City, before these are distributed to food companies and factories elsewhere.

Their situation now allows for faster cash, Montaño said, but the women leaders dream that they, too, would have the opportunity to sell their goods directly, preferably at a higher price.

But those dreams would have to be taken a day at a time. This month, as they face the new crop season, the women of Cherish hope that the tides, literally and figuratively, will turn in their favor.

Read Next
Crunchy tableware: Have your plate — and eat it, too
EDITORS' PICK
Smart releases Hyun Bin’s second TVC
Current dominant strain of COVID-19 more infectious than original—study
Water remains our saving grace right now
DOLE: Return of OFWs’ remains from Saudi to be ‘delayed,’ deadline moved to ‘early next week’
‘Justice will be done,’ Duterte assures as he vowed probe on Jolo incident to bare ‘truth’
EuroMillions Superdraw: A lottery draw unlike any other is coming to the Philippines
MOST READ
Duterte tells military: No other president looked at you the way I did
BREAKING: Duterte signs anti-terror bill into law
Locsin warns of ‘severest response’ if China’s army drills in SCS ‘spill over’ to PH domain
Vico: Cleanup of bidding process saved Pasig gov’t P415M
Don't miss out on the latest news and information.